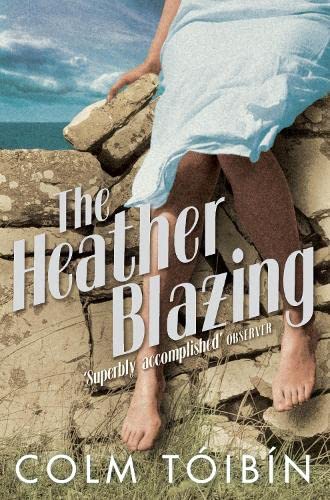 The Heather Blazing
by Colm Toibin

In Stock
£6.99
The Heather Blazing is a wonderful character study of a man, his childhood, family, and community.
Very Good Good
7 in stock

The Heather Blazing by Colm Toibin

Colm Toibin's The Heather Blazing details the life of Eamon Redmond, a judge in Ireland's high court, a man remote from his wife, his son and daughter and, at least outwardly, from his own childhood. The life he has built for himself, between his work in Dublin and his family's retreat by the sea at Cush, is distinguished by order and by achievement. When, like his beloved coastline, it begins to slip away, he is pulled sharply into the present, and finds himself revisiting his past.

It is impossible to read Toibin without being moved, touched and finally changed. * Independent on Sunday *
Proceeds with stately grace from past to present, incident to incident, slowly forming, as it moves, the full shape of a man's public and private life. * Washington Post *
If Colm Toibin were a singer you would say he had perfect pitch. * Spectator *

GOR001105246
The Heather Blazing by Colm Toibin
Colm Toibin
Used - Very Good
Paperback
Pan Macmillan
1993-09-01
256
0330321250
9780330321259
Winner of Encore Award 1993
Book picture is for illustrative purposes only, actual binding, cover or edition may vary.
This is a used book - there is no escaping the fact it has been read by someone else and it will show signs of wear and previous use. Overall we expect it to be in very good condition, but if you are not entirely satisfied please get in touch with us.