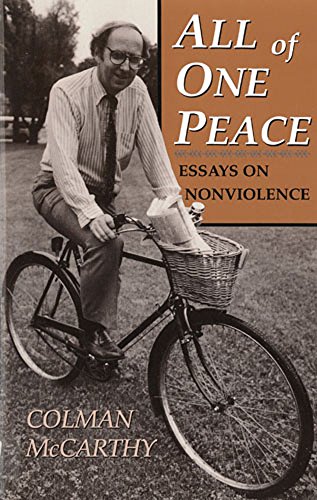 All of One Peace
by Colman McCarthy

All of One Peace Summary

All of One Peace: Essays on Nonviolence by Colman McCarthy

A writer for the Washington Post for twenty-five years, Colman McCarthy is well respected as a pacifist, teacher, journalist, and advocate of nonviolence. In his twice-weekly columns which are nationally syndicated, he has extolled nonviolence as both a philosophy and a practical way of life. As a high-school, college, and law school teacher, he has taught the principles and history of nonviolence to more than three thousand students in the past decade.

What McCarthy has written over the years is, as he puts it, all of one peace. His consistency of vision derives from the indwelling of nonviolence. He blames no one for the culture of violence in which we live, but for a quarter-century he has spoken out honestly and passionately against that culture. All of One Peace is a major part of the body of work that has come to stand for integrity, reason, and candor in a time marked by lies, violence, and absurdity.

Colman McCarthy is a columnist for the Washington Post. He is the founder and director of the Center for Teaching Peace and is on the adjunct faculty at Georgetown University Law Center and the University of Maryland.

GOR009958159
All of One Peace: Essays on Nonviolence by Colman McCarthy
Colman McCarthy
Used - Very Good
Paperback
Rutgers University Press
2006-05-15
233
0813520975
9780813520971
N/A
Book picture is for illustrative purposes only, actual binding, cover or edition may vary.
This is a used book - there is no escaping the fact it has been read by someone else and it will show signs of wear and previous use. Overall we expect it to be in very good condition, but if you are not entirely satisfied please get in touch with us.