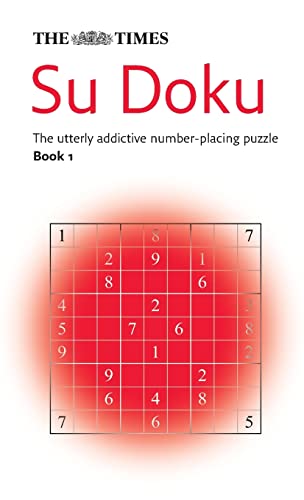 The Times Su Doku Book 1
by Compiled by Wayne Gould

Su Doku, the wordless crossword in The Times, has taken the puzzle world by storm.This is the first and only official book of the puzzle, certain to satisfy the many fans of this exciting new brainteaser.

The Times Su Doku Book 1: 100 challenging puzzles from The Times by Compiled by Wayne Gould

Su Doku, the wordless crossword in The Times, has taken the puzzle world by storm.This is the first and only official book of the puzzle, certain to satisfy the many fans of this exciting new brainteaser.

Su Doku is the biggest craze to hit The Times since the first crossword was published in 1930. From obscure origins, the wordless puzzle is now the hottest challenge to readers of The Times and has generated a huge postbag at the newspaper's offices. Emails and letters have been arriving by the thousand each day.

Here, for the first time, is a collection of 100 never-before-published puzzles ranked in order of difficulty. They have been created by Wayne Gould who sets the puzzle for The Times.

Wayne Gould is the brains behind Su Doku. A former High Court judge in Hong Kong, he now spends his time developing the puzzle.

About Compiled by Wayne Gould

Gould was a lawyer for 13 years in Matamata, New Zealand, before coming to Hong Kong in 1982 where he worked his way up to become Chief District Judge in 1993. He retired from the Judiciary in 1997 and, that same year, during a visit to Japan, he was in a bookstore where, not knowing how to read or speak Japanese, he was drawn to the puzzle which he first thought was a crossword. He was intrigued and later on he decided to take it with him to the United States and Britain. After his initial retirement, in efforts to pass time and sharpen his computer skills, Gould developed the computer program that generates Sudoku puzzles. Wayne Gould says retirement can now wait as Sudoku keeps him busier than ever. He travels between his different bases; Lantau and New Hampshire in the United States, where his wife Gaye is a professor of linguistics, and other parts of the world to which his new hobby has taken him. He has two children, daughter Sally, 29, and son, Scott, 27.

GOR010511484
The Times Su Doku Book 1: 100 challenging puzzles from The Times by Compiled by Wayne Gould
Compiled by Wayne Gould
Used - Like New
Paperback
HarperCollins Publishers
2005-03-07
176
0007207328
9780007207329
N/A
Book picture is for illustrative purposes only, actual binding, cover or edition may vary.
The book has been read, but looks new. The book cover has no visible wear, and the dust jacket is included if applicable. No missing or damaged pages, no tears, possible very minimal creasing, no underlining or highlighting of text, and no writing in the margins.