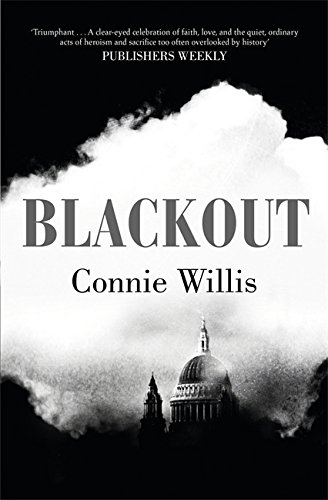 BLACKOUT is the opening movement of a vast, absorbing two-volume novel that may well prove to be Connie Willis' masterpiece. Like her multi-award winning THE DOOMSDAY BOOK, this stunning new work marries the intricate mechanics of time travel to the gritty - and dangerous - realities of human history. The narrative opens in Oxford, England in 2060, where a trio of time traveling scholars prepares to depart for various corners of the Second World War. Their mission: to observe, from a safe vantage point, the day-to-day nature of life during this critical historical moment. As the action ranges from the evacuation of Dunkirk to the manor houses of rural England to the quotidian horrors of London during the Blitz, the objective nature of their roles gradually changes. Cut off from the safety net of the future and caught up in the chaotic events that make up history, they are forced to participate, in unexpected ways, in the defining events of the era. BLACKOUT is an ingeniously constructed time travel novel and a grand entertainment. More than that, it is a moving, exquisitely detailed portrait of a world under siege, a world dominated by chaos, uncertainty, and the threat of imminent extinction. It is the rare sort of book that transcends the limits of genre, offering pleasure, insight, and illumination on virtually every page.

""This compassionate and deeply imagined novel . . . gives the reader a strong you-were-there feeling."
--"The Times-Picayune"

"[Willis has] researched Blackout so thoroughly, her readers may imagine she had access to the time machine her characters use."
"--The Seattle Times"

Constance Elaine Trimmer Willis has won, among other awards, ten HUGO AWARDS and six NEBULA AWARDS for her writing. She lives in Greeley, Colorado with her husband Courtney Willis, a professor of physics at the University of Northern Colorado.