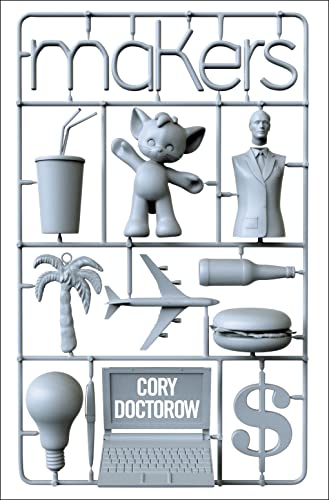 What does the future look like? A brilliantly entertaining and original novel about the end of the economy from the visionary author of Little Brother.

What does the future look like? A brilliantly entertaining and original novel about the end of the economy from the visionary author of Little Brother.

Perry and Lester invent things. All sorts of things. Seashell robots that make toast, Boogie Woogie Elmo dolls that drive cars. They also invent an entirely new economic system. 'New Work' is a New Deal for the technological era. Soon barefoot bankers are criss-crossing the nation, microinvesting in high-tech communal start-ups like Perry and Lester's. Together they transform a country, and journalist Suzanne Church is there to document it.

But a new economic system requires a whole new belief system - and there are plenty of non-believers out there. The New Work bust puts the dot.com-bomb to shame and soon Perry and Lester are out of funds and out of business. Down but not out, they go back to what they do best - making stuff. But when a rogue Disney executive grows jealous of their once more soaring popularity and convinces the police that their amazing 3-D printers are being used to run off AK-47s, things get very dark very quickly...

This brilliantly entertaining and original novel from the visionary author of Little Brother fizzes with bold ideas about the future and how our lives will look as part of it. But at its heart are three characters, Perry, Lester and Suzanne, on an unforgettable journey that will bring them together only to break them apart as they each try to discover how to live meaningfully in an ever-changing world filled with both beauty and horror - where some things really are immutable...

`Doctorow's novel fizzes with ideas and jumps with breathtaking speed from one technological breakthrough to another until you're no longer sure what's based on reality and what's purely a figment of his inventive mind ... Doctorow's optimism about the technology of the present and the near future is infectious' Guardian

`Fresh and full of thought-provoking ideas, a book about tomorrow that demands to be read now.' The Times

`A compelling near-future tale ... a complex, ideas-led, thought-provoking book ... the vivid characters and meticulously crafted future make this a book well worth checking out' SFX

`A tour de force ... one of the most brilliant reimaginings of the near future since cyberpunk wore out its mirror shades ... bitingly realistic and miraculously avoids cliche or predictability' Publishers Weekly

`There is plenty in Cory Doctorow's fifth novel to get technology buffs salivating ... interesting and effective' Metro

`I'd recommend `Little Brother' over pretty much any book I've read this year. Because I think it'll change lives. It's a wonderful, important book' Neil Gaiman

Canadian-born Cory Doctorow is the author of the New York Times bestselling novel Little Brother. He has won the Locus Award for his fiction three times, been nominated for both the Hugo and the Nebula, and is the only author to have won both the John W. Campbell Award for Best New Writer and the Campbell Award for best SF Novel of the Year. He is the co-editor of BoingBoing.net, writes columns for Make, Information Week, the Guardian online and Locus and has been named one of the internet's top 25 influencers by Forbes magazine and a Young Global Leader by the World Economic Forum. Cory Doctorow lives in London with his wife and daughter.

GOR002436666
Makers by Cory Doctorow
Cory Doctorow
Used - Very Good
Paperback
HarperCollins Publishers
2010-07-08
592
0007327897
9780007327898
N/A
Book picture is for illustrative purposes only, actual binding, cover or edition may vary.
This is a used book - there is no escaping the fact it has been read by someone else and it will show signs of wear and previous use. Overall we expect it to be in very good condition, but if you are not entirely satisfied please get in touch with us.