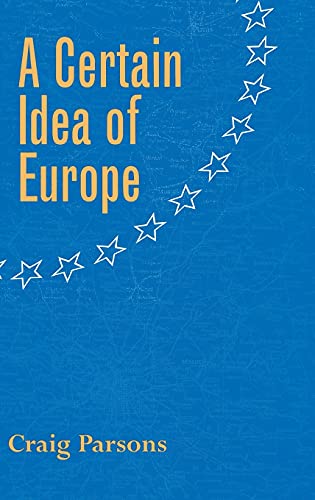 A Certain Idea of Europe
by Craig Parsons

The quasi-federal European Union stands out as the major exception in the thinly institutionalized world of international politics. Something has led Europeans-and only Europeans-beyond the nation-state to a fundamentally new political architecture...

A Certain Idea of Europe Summary

A Certain Idea of Europe by Craig Parsons

The quasi-federal European Union stands out as the major exception in the thinly institutionalized world of international politics. Something has led Europeans-and only Europeans-beyond the nation-state to a fundamentally new political architecture. Craig Parsons argues in A Certain Idea of Europe that this "something" was a particular set of ideas generated in Western Europe after the Second World War.

In Parsons's view, today's European Union reflects the ideological (and perhaps visionary) project of an elite minority. His book traces the progressive victory of this project in France, where the battle over European institutions erupted most divisively. Drawing on archival research and extensive interviews with French policymakers, the author carefully traces a fifty-year conflict between radically different European plans. Only through aggressive leadership did the advocates of a supranational "community" Europe succeed at building the EU and binding their opponents within it.

Parsons puts the causal impact of ideas, and their binding effects through institutions, at the center of his book. In so doing he presents a strong logic of "social construction"-a sharp departure from other accounts of EU history that downplay the role of ideas and ideology.

A Certain Idea of Europe Reviews

"A Certain Idea of Europe is a political journey, from the immediate post-war period to the European Union of the late 1990s that follows the place of French ideas in the establishment and development of the European Union we know today.... Parsons succeeds in piercing the strategic skin of the French political approach to Europe for most of the 20th century and analysing the ideas beneath."

"Parsons provides a full and intricate history of French diplomacy on the question of European Community building. It stands in its own right as a new and scholarly contribution to French postwar history and politics up to the end of the 1970s."

"Parsons's book is a welcome addition to the study of the European Union.... Parsons provides a vivid discussion on the early dynamics of French efforts to influence the evolution of European institutions from their inception after World War Two.... The book is both substantively and theoretically rich, and provides a wealth of bibliographic resources, analytical footnotes, and a well-organized index.... Highly recommended. General readers and upper-division undergraduates and above."

Craig Parsons is Assistant Professor of Political Science at the Maxwell School of Syracuse University and Director of the Maxwell European Union Center.

GOR009959461
A Certain Idea of Europe by Craig Parsons
Craig Parsons
Cornell Studies in Political Economy
Used - Very Good
Hardback
Cornell University Press
2003-06-26
272
0801440866
9780801440861
N/A
Book picture is for illustrative purposes only, actual binding, cover or edition may vary.
This is a used book - there is no escaping the fact it has been read by someone else and it will show signs of wear and previous use. Overall we expect it to be in very good condition, but if you are not entirely satisfied please get in touch with us.