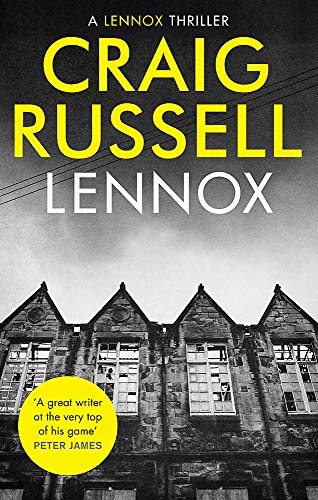 'Tough, uncompromising and insightful . . . Russell has brilliantly captured post-war Glasgow and the vulnerability of those left to pick up the pieces' Michael Robotham

'A crime story that transcends the genre. . .This is storytelling at its very best!' Michael Connelly

Glasgow, 1953: the war may be over but the battle for the streets is just beginning. Three crime bosses control the murky streets, but a small-scale con is trying to invade their territory. The balance is shifting. Lennox, a hard man in a hard city at a hard time, finds himself caught in the middle - a dangerous place to be.

One night, a body is discovered on the road, his head mashed to pulp, and Lennox is in the frame for murder. The only way of proving his innocence is to solve the crime - but he'll have to dodge men more deadly than Glasgow's crime bosses before he gets any answers.

The first in a unique and memorable crime series, Lennox is gritty, fast-paced, mordantly funny and totally compelling.

'Another brilliantly sharp, witty and tough take on a hard city at a hard time . . . a former cop, Russell is Britain's rising crime-writing star' Daily Mirror

'Through his humorous lens, time and place become razor-sharp ... The lightness of touch is a breath of fresh air in this most crowded of genres . . . This is tartan neo-noir at its most entertaining' Sunday Herald

Craig Russell's novels have been published in twenty-five languages, four have been made into major films in Germany, in one of which he has a cameo role as a detective. He has won the CWA Dagger in the Library and the McIlvanney Prize (for which he has been shortlisted another twice), and has previously been shortlisted for the CWA Golden Dagger, the Ellis Peters Historical Dagger, and the SNCF Prix Polar in France. A former police officer, Craig Russell is the only non-German to have been awarded the Polizeistern - the Hamburg Police's Police Star.

When not writing, Craig Russell paints, cooks and reads, but not simultaneously.

The movie rights to THE DEVIL ASPECT have been acquired by Columbia Pictures.

GOR010319641
Lennox by Craig Russell
Craig Russell
Lennox
Used - Like New
Paperback
Little, Brown Book Group
2019-09-24
352
147213091X
9781472130914
N/A
Book picture is for illustrative purposes only, actual binding, cover or edition may vary.
This is a used book - there is no escaping the fact it has been read by someone else and it will show signs of wear and previous use. Overall we expect it to be in very good condition, but if you are not entirely satisfied please get in touch with us.