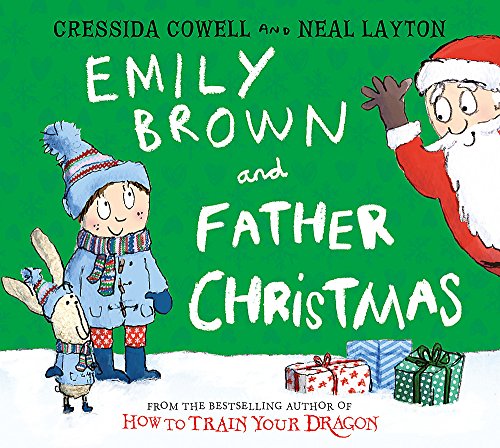 Used Price
8,19 £
New RRP 12,99 £
Free Shipping in the UK
Emily Brown and Stanley are back in this fun-filled Christmas picture book. By the author of the bestselling How to Train Your Dragon series.
Reviews:
Trustpilot
Very Good

Emily Brown and Stanley are back in this fun-filled Christmas picture book. By the author of the bestselling How to Train Your Dragon series.

It's Christmas Eve, and who's that outside the window? It's Father Christmas! In his shiny new turbo-charged sleigh, complete with sat-nav. But things aren't going quite to plan...

Can Emily Brown and Stanley save the day? They'll just need some emergency reindeer, a star map and ... MAGIC!

A charmingly funny adventure about cherishing traditions, this is classic Christmas storytelling at its best. *With a shiny gold cover!*

Written by Cressida Cowell, the bestselling author of the How to Train Your Dragon series.

Illustrated by Neal Layton, the artist behind Stanley's Stick and Danny McGee Drinks the Sea, shortlisted for the Laugh Out Loud Picture Book Award.

Any parent whose child has resisted bedtime will relate to this funny tale. * The Sun *
A supremely witty take, verbal and visual, on the improbably magic of present delivery. * The Sunday Times *
Cressida Cowell...is a bona fide superstar of the children's books circuit. * Huffington Post *
The gorgeous story has an important message about cherishing traditions, old and new, that children everywhere will understand. A winning combination of a bunny, gifts ad enchanting illustrations ensure the Christmas magic is complete. * The Sun *
A supremely witty take, verbal and visual * The Sunday Times *
Deliciously droll * The New Statesman *
Fabulously fun artwork from Neal Layton and a laugh-out-loud text from the author of How to Train Your Dragon, Emily Brown is a character that everyone will love. This festive tale serves as a perfect introduction to the series, or a great addition for long-standing fans. * Booktrust *
Cowell is best-known for her books for older readers, but Emily Brown proves she understands younger readers and their delight in repetition, catchphrases and manageable disaster. Layton's illustrations, meanwhile, literally pop off the page, with cut-out cartoon-style characters placed upon a watercolour and pencil-sketch background in an effective collage-inspired style. * Irish Times *
A story that celebrates the best of Christmas * Storytime magazine *

Cressida Cowell is currently the Waterstones Children's Laureate (2019 - 2021). She is the author and illustrator of the bestselling The Wizards of Once and How to Train Your Dragon books series, and the author of the Emily Brown picture books, illustrated by Neal Layton. The Wizards of Once series has been translated into 38 languages and has been signed by DreamWorks Animation. How to Train Your Dragon has sold over 8 million books worldwide in 38 languages and is a major DreamWorks Animation film franchise, as well as being made into a TV series on Netflix and CBBC. Cressida is an ambassador for the National Literacy Trust and the Reading Agency, a Trustee of World Book Day and a founder patron of the Children's Media Foundation. She has won numerous prizes, including the Gold Award in the Nestle Children's Book Prize. Neal is an award-winning illustrator and author of children's books. He has worked on more than 80 titles to date, working with authors such Cressida Cowell and Michael Rosen, and won several prizes including a Gold Award in the Nestle Children's Book Prize for That Rabbit Belongs to Emily Brown. His books have also been shortlisted for the Red House Book Awards, the Blue Peter Book Awards, the Booktrust Early Years Award, Funfzig Jahre Deutcher Jugendliteraturpreis and New York Public Library's annual list of Best Children's Books.He also writes his own books, such as eco-picture book A Planet Full of Plastic and 'The Invincible Tony Spears' fiction series. His books are currently in print in more than 16 languages worldwide. He lives in Portsmouth with his wife and two daughters.

GOR009672354
Emily Brown and Father Christmas by Cressida Cowell
Cressida Cowell
Emily Brown
Used - Very Good
Hardback
Hachette Children's Group
2018-10-04
32
1444941992
9781444941999
N/A
Book picture is for illustrative purposes only, actual binding, cover or edition may vary.
This is a used book - there is no escaping the fact it has been read by someone else and it will show signs of wear and previous use. Overall we expect it to be in very good condition, but if you are not entirely satisfied please get in touch with us.