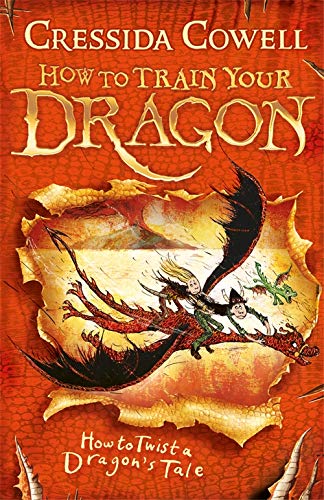 How to Train Your Dragon: How to Twist a Dragon's Tale
by Cressida Cowell

In Stock
4,99 £
The hilarious exploits of Hiccup Horrendous Haddock the Third - the smallish Viking with a longish name. Can he become the Hero everyone expects him to be? Read the bestselling series that inspired the hit DreamWorks film How to Train Your Dragon.
Very Good Good
59 in stock

How to Train Your Dragon: How to Twist a Dragon's Tale Summary

How to Train Your Dragon: How to Twist a Dragon's Tale: Book 5 by Cressida Cowell

Read the HILARIOUS books that inspired the HOW TO TRAIN YOUR DRAGON films!

Hiccup Horrendous Haddock the Third is a smallish Viking with a longish name. Hiccup's father is chief of the Hairy Hooligan tribe which means Hiccup is the Hope and the Heir to the Hairy Hooligan throne - but most of the time Hiccup feels like a very ordinary boy, finding it hard to be a Hero.

Over on Lava-Lout Island, the volcano is ready to blow. Now Hiccup faces a terrifying Quest to Stop the Volcano Exploding, alongside his best friend Fishlegs and Humungously Hotshot the ex-Hero.

But not only is Lava-Lout Island full of EXTERMINATOR DRAGONS, Hiccup's ARCH ENEMY is also lurking - and he's seeking REVENGE!

How to Train Your Dragon is now a major DreamWorks franchise starring Gerard Butler, Cate Blanchett and Jonah Hill and the TV series, Riders of Berk, can be seen on CBeebies and Cartoon Network.

How to Train Your Dragon: How to Twist a Dragon's Tale Reviews

'exuberantly illustrated ... laugh out-loud books, they will convert even the most relcutant reader to take their first dip.' * Julia Golding, TES *
'a hilarious and gripping adventure, beautifully paced and studded with great dramatic scenes.' * Amanda Craig, Times *
'Cowell writes laugh-out-loud books with plenty of boy appeal ... Cowell's anarchic drawings suit the slapstick humour.' * The Herald *
'Fiercely exciting and laugh-aloud funny, it is as full of joy for children of 7+ who have given up reading as for those who love it.' * Amanda Craig, The Times *
Irresistably funny, exciting and endearing * Amanda Craig, The Times *
CHILDREN'S BOOK OF THE WEEK: This book is great fun and has a Blackadderish sense of humour ... full of the sort of jokes that will make schoolboys snigger. * Nicolette Jones, The Sunday Times *
How to Train Your Dragon is a delightful narrative caper... It offers a challenging read to 11-year-olds, and rewards reading aloud, especially for those who relish an element of theatre at story time. * Sunday Herald, Glasgow *
... raucous and slapstick ... liberally illustrated with [Cressida Cowell's] riotous drawings, notes and maps. * The Financial Times *
[Cressida Cowell] puts a contemporary spin on the old brains over brawn moral and brings the story to a climax with a thrilling dragon duel. Lots for lots of different readers to enjoy. * Books for Keeps *
Bulging with good jokes, funny drawings and dramatic scenes, it is absolutely wonderful. * Independent on Sunday *
'funny, outrageous and will lure in the most reluctant reader.' * The Spectator *
'If you haven't discovered Hiccup yet, you're missing out on one of the greatest inventions of modern children's literature.' * Julia Eccleshare, Guardian children's editor *

Cressida Cowell is the author and the illustrator of the bestselling How to Train Your Dragon and The Wizards of Once book series, and the author of the Emily Brown picture books, illustrated by Neal Layton. How to Train Your Dragon has sold over 8 million books worldwide in 38 languages. It is also an award-winning DreamWorks film series, and a TV series shown on Netflix and CBBC. The first book in Cressida's new series, The Wizards of Once (also signed by DreamWorks), is a number one bestseller. Cressida is an ambassador for the National Literacy Trust and the Reading Agency, a Trustee of World Book Day and a founder patron of the Children's Media Foundation. She has won numerous prizes, including the Gold Award in the Nestle Children's Book Prize,the 2017 Ruth Rendell Award for Championing Literacy, the Hay Festival Medal for Fiction, and Philosophy Now magazine's 2015 Award for Contributions in the Fight Against Stupidity. She grew up in London and on a small, uninhabited island off the west coast of Scotland and she now lives in Hammersmith with her husband, three children and a dog called Pigeon.

GOR002306778
How to Train Your Dragon: How to Twist a Dragon's Tale: Book 5 by Cressida Cowell
Cressida Cowell
How to Train Your Dragon
Used - Very Good
Paperback
Hachette Children's Group
2010-02-25
272
034099911X
9780340999110
N/A
Book picture is for illustrative purposes only, actual binding, cover or edition may vary.
This is a used book - there is no escaping the fact it has been read by someone else and it will show signs of wear and previous use. Overall we expect it to be in very good condition, but if you are not entirely satisfied please get in touch with us.