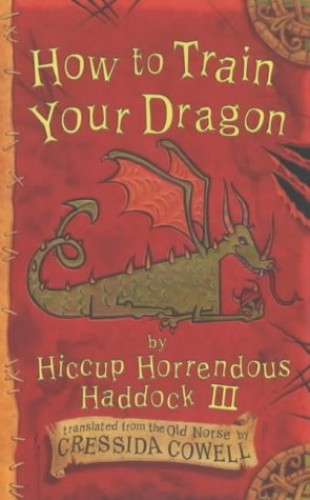 How To Train Your Dragon
by Cressida Cowell

In Stock
£5.99
The story of Hiccup Haddock Horrendous III's rise to fame, through his dragon-training exploits, told in his own words.
Like New Very Good Good
Only 1 left

How To Train Your Dragon Summary

How To Train Your Dragon: Book 1 by Cressida Cowell

Read the original books before you see the How to Train Your Dragon film!

THE STORY BEGINS in the first volume of Hiccup's How to Train Your Dragon memoirs...

Hiccup Horrendous Haddock III was an awesome sword-fighter, a dragon-whisperer and the greatest Viking Hero who ever lived. But it wasn't always like that. In fact, in the beginning, Hiccup Horrendous Haddock III was the most put upon Viking you'd ever seen. Not loud enough to make himself heard at dinner with his father, Stoick the Vast; not hard enough to beat his chief rival, Snotlout, at Bashyball, the number one school sport and CERTAINLY not stupid enough to go into a cave full of dragons to find a pet... It's time for Hiccup to learn how to be a Hero.

Read the rest of Hiccup's exploits in the How to Train Your Dragon series in How to Be a Pirate, How to Speak Dragonese, How to Cheat a Dragon's Curse, How to Twist a Dragon's Tale, A Hero's Guide to Deadly Dragons, How to Ride a Dragon's Storm, and How to Break a Dragon's Heart.

Check out the all-new Hiccup website at www.howtotrainyourdragonbooks.com It's the place to go for games, downloads, activities and sneak peeks! Read all about Hiccup and all of your favourite characters, learn to speak Dragonese and train your own dragon to do tricks!

How To Train Your Dragon Reviews

The first in the successful series... perfect for tricky boy readers, as the action scenes are first-class. * The Sunday Telegraph *
Mentioned in the 100 Best Children's Books Ever (Novels) * The Daily Telegraph *
If you haven't discovered Hiccup yet, you're missing out on one of the greatest inventions of modern children's literature -- Julia Eccleshare, Guardian's children's books editor
Filled with thrilling adventure and action-packed heroes -- Charlotte Tarling, Year 6 * Country Child *
By turns hilarious and wise, it's never predictable, brilliantly illustrated and always delightful * The Times *
Proper modern classics * Sunday Express *
Hilarious * guardian.co.uk *
A laugh out loud romp of a Viking adventure * Observer *
The start of the most original series for kids in ages. Funny, clever and great for the whole family to share * Dundee Courier *
Her genuinely fierce, intelligent and scary dragons nearly steal the show, but Hiccup and his diminutive sidekick ultimately come out on top, both displaying a proper hero's mix of quick wit, courage and loyalty * Kirkus *
One of the most enjoyable and original children's stories I have heard in a long time * The Independent *
I can't praise this wonderful adventure too highly -- Amanda Craig * Independent on Sunday *
Bulging with good jokes, funny drawings and dramatic scenes, it is absolutely wonderful * Independent on Sunday *
This light-hearted, well-illustrated mock saga would appeal to girls and boys. My Dad liked it too. More please. -- Geoffrey Truscott, aged 11 * The Glasgow Herald *
What we have here is Harry Potter meets Blackadder. The result is a story that anyone with a tolerance of snot and gore would find richly entertaining * The Glasgow Herald *
Cowell's wittily written books have become today's childhood must-read stories * Books Quarterly (Waterstones) *
This book will definitely make you laugh out loud * Torquay Herald Express *
Gripping adventure stories complete with quests and battles, a vivdly imagined alternative world * The Daily Telegraph *
Top stuff * The Daily Telegraph *
Cressida Cowell's series of the memoirs of Hiccup the Viking are funny, outrageous and will lure in the most reluctant reader * The Spectator *
Funny, thrilling and ideal for children needing to discover the hero inside themselves * The Times *
Wise, colourful and funny * Dorset Echo *
Cowell is a master of storytelling...On a profound level, this series celebrates divergence and being true to oneself, teaching children that they don't have to be carbon copies of their parents * Hay Festival of the Arts *
Cressida Cowell's How to Train Your Dragon books fill every spread with scales and fangs and typographical jeux d'esprit * The Independent *
Descriptive and flowing, Cowell's Dragon novels have become deserved hits at the cinema, too. * Time Out *
Has a good story to it -- Jamie, aged 9 * Daily Record *
Full of bright wit and brutal honesty, this is a brilliant book that launched a huge series ... This is a fantastic adventure that explores failure as well as success and weighs the cost of being different against the price of fitting in with sneaky maturity and shining humour * The List *
'If you haven't discovered Hiccup yet, you're missing out on one of the greatest inventions of modern children's literature.' * Guardian children's editor *
CHILDREN'S BOOK OF THE WEEK: 'This book is great fun and has a Blackadderish sense of humour ... full of the sort of jokes that will make schoolboys snigger.' * Nicolette Jones, The Sunday Times *
A super story, inventive, ingenious, perpetually surprising. One to cherish. * Armadillo, Spring 2003 *
A wonderfully wittily written and illustrated story. * Waterstones Quarterly Magazine *
How to Train Your Dragon is a delightful narrative caper... It offers a challenging read to 11-year-olds, and rewards reading aloud, especially for those who relish an element of theatre at story time. * Lindsey Fraser, Sunday Herald, Glasgow *
... raucous and slapstick... liberally illustrated with [Cressida Cowell's] riotous drawings, notes and maps. * The Financial Times *
[Cressida Cowell] puts a contemporary spin on the old brains over brawn moral and brings the story to a climax with a thrilling dragon duel. Lots for lots of different readers to enjoy. * Books for Keeps *
Cowell brings Hiccup to life in this silly and delightful little novel. * St Paul Pioneer Press *
Bulging with good jokes, funny drawings and dramatic scenes, it is absolutely wonderful. * Independent on Sunday *
"The combination of cartoons with sharp wit is what makes this book so uniquely special" * Books Quaterly (Waterstones) *

Cressida grew up in Chelsea. She studied English Literature at Keble College, Oxford University. She then worked at Macmillan in the Fiction department. She took a BA at St Martins in graphic design and then an MA in Narrative Illustration at Brighton. She is married with two children and lives in London.

GOR009601919
How To Train Your Dragon: Book 1 by Cressida Cowell
Cressida Cowell
How To Train Your Dragon
Used - Like New
Paperback
Hachette Children's Group
2003-03-13
224
0340860685
9780340860687
N/A
Book picture is for illustrative purposes only, actual binding, cover or edition may vary.
The book has been read, but looks new. The book cover has no visible wear, and the dust jacket is included if applicable. No missing or damaged pages, no tears, possible very minimal creasing, no underlining or highlighting of text, and no writing in the margins.