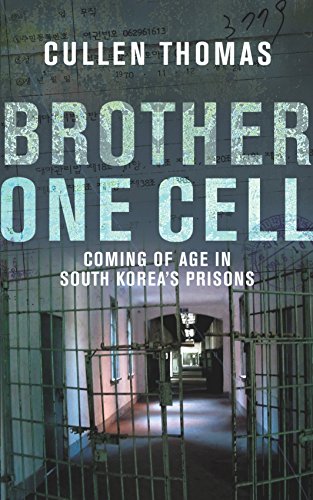 Brother One Cell
by Cullen Thomas

In Stock
£4.99
An extraordinary prison memoir, with strong writing and an exotic background.
Very Good
Only 1 left

Brother One Cell: A powerful story of survival in South Korea's prisons by Cullen Thomas

'The pain in my side hasn't been diagnosed but I'm sure it's Korea. A little Korean tumour there between the pancreas and liver, or maybe a Korean tear in the muscle around the ribs, a Korean hernia, a persistent Korean funk . . . the Hermit Kingdom took a huge piece of me, she vigorously broke me down and forced me to start life over'

Locked up for three and a half years for smuggling hashish, young American Cullen Thomas found himself struggling to survive in South Korea's harshest prisons. In this evocative memoir he describes the extraordinary people he encountered: the Pakistani people-traffickers awaiting the death penalty for murder, the Columbian emerald smuggler, the carefree Peruvian luggage thief who travelled the world in a business suit, the American who killed his two sons, the Korean gang leader who inspired him to find dignity and purpose in his life inside prison. As he learned to adapt to both the prison regime and the unspoken rules of Korea's Confucian society, he found within himself a kind of freedom and gratitude to the men he'd come to know, the struggle he'd passed through, to Korea herself.

a"Brother One Cell" is Mr. Thomasas affecting account of his prison experience. Itas an offbeat coming of age story, the tale of a wide-eyed, innocent, middle-class American thrust into a world of deprivation and daily trials that speed his passage into adulthood and a deeper understanding of himself and the fallen creatures around him . . . told simply, and with extraordinary good humor...[T]he detail is fascinating.a aWilliam Grimes, "The New York Times" "Compelling." a"Chicago Tribune" aScary, funny, [and] honest as hell . . . This is memoir at its highest level.a aRay LeMoine, co-author of "Babylon by Bus" aIn reflective, often highlighter-worthy prose . . . Thomas lyrically describes his Zenlike effort to stay sane through shoe-factory work and prison basketball.a a"Outside" "His account of that journey [to higher understanding] is gripping." a"Booklist" (Starred Review)

Cullen Thomas lives and works in New York. His writing has appeared in the New York Times, the Washington Post, Salon and Current Biography, among other publications. This is his first book.

GOR000993117
Brother One Cell: A powerful story of survival in South Korea's prisons by Cullen Thomas
Cullen Thomas
Used - Very Good
Paperback
Pan Macmillan
2006-06-02
288
0283070250
9780283070259
N/A
Book picture is for illustrative purposes only, actual binding, cover or edition may vary.
This is a used book - there is no escaping the fact it has been read by someone else and it will show signs of wear and previous use. Overall we expect it to be in very good condition, but if you are not entirely satisfied please get in touch with us.