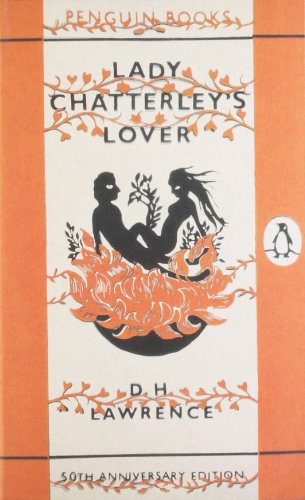 Used Price
£4.49
New RRP £8.99
Free Shipping in the UK
In 1960 Penguin Books were prosecuted when they tried to publish Lady Chatterley's "Lover" unexpurgated for the first time. What followed was the most talked-about obscenity trial of the twentieth century, which resulted in a 'not guilty' verdict. This title celebrates the 50th anniversary of the novel and the trial.
Reviews:
Trustpilot
Like New Very Good Good

In 1960 Penguin Books were prosecuted when they tried to publish Lady Chatterley's Lover unexpurgated for the first time. What followed was the most talked-about obscenity trial of the twentieth century, which resulted in a 'not guilty' verdict. Penguin's successful defence of the book's literary merit was a victory of free speech, and made Lawrence's story of the affair between a married woman and her gamekeeper an instant bestseller. This special edition celebrates the 50th anniversary of the first UK publication of D. H. Lawrence(1)s unexpurgated novel in 1960 and the most talked-about obscenity trial of the twentieth century. It includes afterwords by Geoffrey Robertson QC, about the legal case that changed Britain, and Steve Hare, revealing the story behind Penguin(1)s decision to publish, as well as a detailed timeline and never-before-published letters and documents relating to the trial.

It was a bomb, not a book * Guardian *
A significant turning point in history * Observer *
No one ever wrote better about the power struggles of sex and love -- Doris Lessing

David Herbert Lawrence was born into a miner(1)s family in Nottinghamshire in 1885, the fourth of five children. After briefly working in both manufacturing and teaching, he published his first novel, The White Peacock, in 1911. He then published Sons and Lovers, but his next novel, The Rainbow, was suppressed for its alleged obscenity, and for three years he could not find a publisher for Women in Love. After the First World War he decided to escape the persecution he had suffered in England and spent many years travelling. His last novel, Lady Chatterley(1)s Lover, was published in 1928 but banned in Britain and America until 1960, when landmark trials cleared the way for publication of unexpurgated editions for the first time. Lawrence died in Vence, in the south of France, in 1930, at the age of forty-four.

Geoffrey Robertson QC has acted for the defence at many of the significant censorship trials since that over Lady Chatterley(1)s Lover, including those regarding Oz, Gay News, The Romans in Britain, Inside Linda Lovelace and The Satanic Verses, and has appeared at important free speech appeals in the Supreme Court, the European Court of Human Rights and many Commonwealth courts. He is author of Obscenity (Weidenfeld & Nicolson, 1979), Media Law (with A. Nicol; Penguin, 5th edn, 2007), Freedom, the Individual and the Law (Penguin, 1993), Crimes Against Humanity (Penguin, 3rd edn, 2006), and a memoir, The Justice Game (1998). He also contributed the introduction to the 1990 reissue of C. H. Rolph(1)s (ed.) The Trial of Lady Chatterley (Penguin Special, 1961). He is the founder and head of Doughty Street Chambers and a Master of the Middle Temple.

Steve Hare is a freelance journalist, author and lecturer, specializing in the visual arts and publishing history. He is the author of Penguin Portrait: Allen Lane and the Penguin Editors 19351970, celebrating Penguin(1)s 60th anniversary in 1995, as well as history of Penguin Classics, published in the Penguin Classics Catalogue 1996 celebrating the list(1)s 50th anniversary. He owns what is possibly the world(1)s largest private collection of Penguins.

GOR010254686
Lady Chatterley's Lover: 50th Anniversary Edition by D. H. Lawrence
D. H. Lawrence
Used - Like New
Paperback
Penguin Books Ltd
2010-11-04
368
0141192178
9780141192178
N/A
Book picture is for illustrative purposes only, actual binding, cover or edition may vary.
The book has been read, but looks new. The book cover has no visible wear, and the dust jacket is included if applicable. No missing or damaged pages, no tears, possible very minimal creasing, no underlining or highlighting of text, and no writing in the margins.