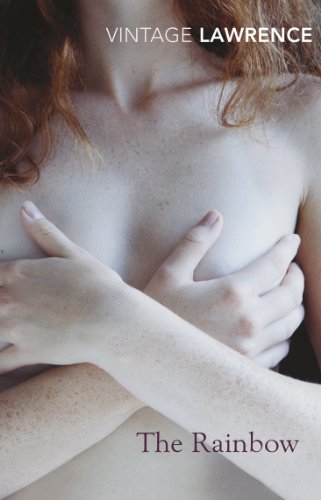 The Rainbow
by D H Lawrence

A novel which chronicles the lines of three generations of the Brangwen family and the emergence of modern England.

Set between the 1840s and the early years of the twentieth century The Rainbow tells the story of three generations of the Brangwen family, ancient occupiers of Marsh Farm, Nottinghamshire.

The Rainbow by D H Lawrence

A novel which chronicles the lines of three generations of the Brangwen family and the emergence of modern England.

Set between the 1840s and the early years of the twentieth century The Rainbow tells the story of three generations of the Brangwen family, ancient occupiers of Marsh Farm, Nottinghamshire. Through courting, pregnancy, marriage and defiance Lawrence explores love and the conflicts it brings.

WITH AN INTRODUCTION BY RACHEL CUSK

Lawrence is the most Dostoevskian of English novelists, in whose best work conflicting ideological positions are brought into play and set up against each other in dialogue that is never simply or finally resolved -- David Lodge
No writer since Lawrence has been so openly governed by what seems like powerful personal likes and dislikes, grievances, and by what appear to many as untenable prejudices -- Amit Chauduri
What astonished me reading it this time round is the iconoclastic modernity of the novel... the sense of daring experiment.. I had entirely forgotten what drastic steps Lawrence was taking with character, for instance. Or with narrative (the novel proceeds cyclically). When this is combined with sexual overtness and a revolutionary call for the individual to achieve "Me-ness" in opposition to the nation, industry and war, we have a book that, appearing as it did in 1915, seemed genuinely disturbing -- Adam Thorpe * Guardian *

David Herbert Lawrence was born 11 September 1885 in Eastwood, Nottinghamshire.His father was a miner and his mother was a schoolteacher.In 1906 he took up a scholarship at Nottingham University to study to be a teacher. His first novel, The White Peacock, was published in 1911. Lawrence gave up teaching in 1911 due to illness. In 1912 he met and fell in love with a married woman, Frieda Weekley, and they eloped to Germany together.They were married in 1914 and spent the rest of their lives together travelling around the world. In 1915 Lawrence published The Rainbow which was banned in Great Britain for obscenity. Women in Love continues the story of the Brangwen family begun in The Rainbow and was finished by Lawrence in 1916 but not published until 1920. Another of Lawrence's most famous works, Lady Chatterley's Lover, was privately printed in Florence in 1928 but was not published in Britain until 1960, when it was the subject of an unsuccessful court case brought against it for obscenity. As well as novels, Lawrence also wrote in a variety of other genres and his poetry, criticism and travel books remain highly regarded. He was also a keen painter. D.H. Lawrence died in France on 2 March 1930.

GOR008082459
The Rainbow by D H Lawrence
D H Lawrence
Used - Like New
Paperback
Vintage Publishing
2011-02-03
480
0099541459
9780099541455
N/A
Book picture is for illustrative purposes only, actual binding, cover or edition may vary.
The book has been read, but looks new. The book cover has no visible wear, and the dust jacket is included if applicable. No missing or damaged pages, no tears, possible very minimal creasing, no underlining or highlighting of text, and no writing in the margins.