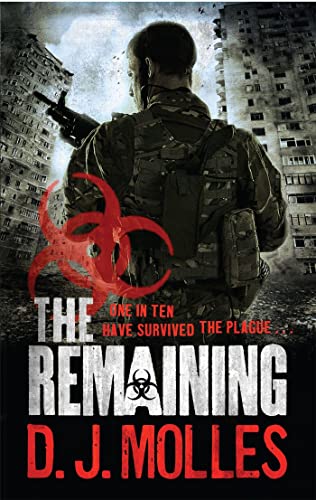 The Remaining
by D. J. Molles

New Price
£8.99
Free Shipping in the UK
The first volume in D.J. Molles's bestselling series, now in a special edition with the bonus novella The Remaining: Faith.
New£8.99

The Remaining by D. J. Molles

A SOLDIER'S MISSION IN A RAVAGED WORLD: SURVIVE, RESCUE REBUILD.

In a steel-and-lead-encased bunker twenty feet below gorund, a soldier waits for his final orders.

On the surface, a bacterium has turned over 90% of the population into hyper-aggressive predators, with an insatiable desire to kill and feed.

But now the day has come when he must open the hatch to his bunker, and step out into the chaos . . .

The first volume in D.J. Molles's bestselling series, now in a special edition with the bonus novella The Remaining: Faith.

Survival horror at almost its very best . . . Molles and Orbit are certainly onto a winner in a series that deserves to be seen by genre fans be it online or on paper * THE BOOK BAG *
These are my current favorite post-apocalyptic zombie novels! . . . I love how this series builds fantastic characters and poses them with and against one another in super believable situations. I can believe this future...The action is detailed and vivid * BOING BOING *
A well written, taut adventure novel with characters that definitely make a mark * SF CROWSNEST *
A thoroughly entertaining read (think Matthew Reilly meets 28 Days Later and you won't go too far wrong) that has me eagerly awaiting the sequel * GRAEME'S SFF *
The Walking Dead fans, this one would be right up your alley . . . Pure zombie fiction fun * BIBLIOSANCTUM *
Sharply targeted sentences depict an acutely human action hero who wrestles his anxiety . . . Molles's precise construction gives readers ample reason to return, as does the agonizing companion novella, which provides an unnerving view of what occurred while Lee was waiting to begin his mission * PUBLISHERS WEEKLY *
A solidly entertaining action adventure with just enough horror to keep things nice and tense * THE ELOQUENT PAGE *
Those who crave a military take on a zombie-like outbreak will want to check [this] out * LIBRARY JOURNAL *

D.J. Molles has two published short stories, "Darkness" and "Survive," which won a short fiction contest through Writer's Digest. The Remaining series (The Remaining, The Remaining: Aftermath, The Remaining: Refugees, and The Remaining: Fractured) are his first novels and have been met with overwhelming success. He lives in the South East of the US with his wife and daughter.