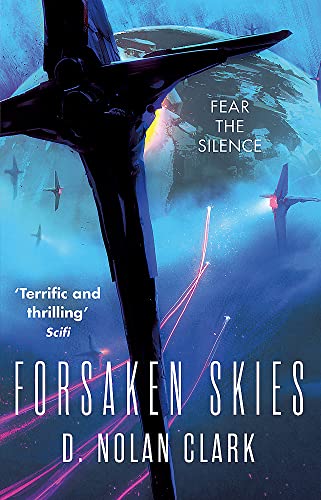 Forsaken Skies: Book One of The Silence by D. Nolan Clark

After centuries of devastating interplanetary civil war, mankind has found a time of relative peace.

That peace is shattered when an unknown armada emerges from the depths of space, targeting an isolated colony planet. As the colonists plead for help, the politicians and bureacrats look away.

But battle-scarred Commander Aleister Lanoe will not abandon thousands of innocents to their fate.

Forsaken skies is the explosive first novel from D. Nolan Clark, an epic tale of a fight against the odds - and the terror of realising that we're no longer alone in the cold vacuum of space.

Unforgettable characters and jam-packed with action [and] adventure... One readers will not want to miss

* Booklist *
Gripping writing, a brilliantly realised future culture and sympathetic characters . . . an entertaining and compelling read -- SFX
Seven Samurai set to a backdrop of a rollicking space opera . . . An action-filled adventure -- BIBLIOSANCTUM
Unforgettable characters and jam-packed with action [and] adventure . . . One readers will not want to miss -- BOOKLIST
Action-packed . . . Terrifying and compelling -- RT BOOK REVIEWS on FORSAKEN SKIES
A terrific and thrilling novel -- SCIFI

D. Nolan Clark is a pseudonym for an acclaimed author who has previously published several novels in different genres.