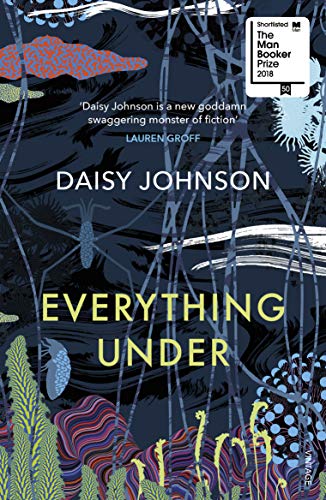 Everything Under
by Daisy Johnson

Everything Under: Shortlisted for the Man Booker Prize 2018 by Daisy Johnson

SHORTLISTED FOR THE MAN BOOKER PRIZE 2018

'Weird and wild and wonderfully unsettling... Dive in for just a moment and you'll emerge gasping and haunted' Celeste Ng

It's been sixteen years since Gretel last saw her mother, half a lifetime to forget her childhood on the canals. But a phone call will soon reunite them, and bring those wild years flooding back: the secret language that Gretel and her mother invented; the strange boy, Marcus, living on the boat that final winter; the creature said to be underwater, swimming ever closer.

In the end there will be nothing for Gretel to do but to wade deeper into their past, where family secrets and aged prophesies will all come tragically alive again.

'As readable as it is dazzling, full of unsettling twists and dark revelations' Observer

Daisy Johnson is a new goddamn swaggering monster of fiction * Lauren Groff *
Saturated in mythology and fairy tales, Everything Under is weird and wild and wonderfully unsettling. Daisy Johnson writes in a torrent of language as unrelenting and turbulent and dark as the river at the book's heart; dive in for just a moment and you'll emerge gasping and haunted -- Celeste Ng
The kind of book that worms its way into your brain, leaving echoes of its story and world long after it is back on the shelf... beautifully creepy and affecting -- Rebecca Nicholson * Observer *
A stunning debut novel. Blending a deep understanding of character and storytelling examination... the result reminds me of Iris Murdoch... Johnson's affinity for the natural world is extraordinary -- Jeff VanderMeer * Guardian *
Everything Under grabbed me from the first page and wouldn't let me go. To read Daisy Johnson is to have that rare feeling of meeting an author you'll read for the rest of your life. * Evie Wyld *
Everything Under is a force of nature ... Like Iris Murdoch's 1954 novel Under the Net, Johnson's Man Booker Prize finalist is concerned with language, secrets and the damage wrought by what's left unsaid. -- Tobias Grey * New York Times Book Review *

Daisy Johnson was born in 1990. Her debut short-story collection, Fen, was published in 2016. In 2018 she became the youngest author ever to be shortlisted for the Man Booker Prize with her debut novel Everything Under. She is the winner of the Harper's Bazaar Short Story Prize, the A. M. Heath Prize and the Edge Hill Short Story Prize. She currently lives in Oxford by the river.

GOR009653282
Everything Under: Shortlisted for the Man Booker Prize 2018 by Daisy Johnson
Daisy Johnson
Used - Very Good
Paperback
Vintage Publishing
2019-02-07
272
1784702110
9781784702113
Short-listed for Man Booker Prize for Fiction 2018 (UK)
Book picture is for illustrative purposes only, actual binding, cover or edition may vary.
This is a used book - there is no escaping the fact it has been read by someone else and it will show signs of wear and previous use. Overall we expect it to be in very good condition, but if you are not entirely satisfied please get in touch with us.