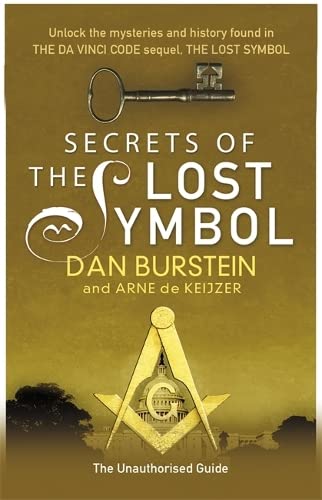 Secrets of the Lost Symbol
by Dan Burstein

Secrets of the Lost Symbol Summary

Secrets of the Lost Symbol: The Unauthorised Guide to the Mysteries Behind The Da Vinci Code Sequel by Dan Burstein

Delve into a whole new world of secret societies, ancient mysteries, hidden symbols, new-age philosophy and cutting-edge science... Discover: the role the Freemasons played in US history; the 'real' Katherine Solomon; the true background of the 'Ancient Mysteries'; the reality of Noetic science and much more...

SECRETS OF THE LOST SYMBOL is a must-read for anyone who wants to separate reality, speculation, fact and fiction in Dan Brown's global phenomenon.

Dan Burstein is an award-winning journalist, venture capitalist and bestselling author of eight books including SECRETS OF THE CODE.

Arne de Keijzer together with Burstein created the Secrets series of books and co-edited SECRETS OF MARY MAGDALENE with him.

GOR010524092
Secrets of the Lost Symbol: The Unauthorised Guide to the Mysteries Behind The Da Vinci Code Sequel by Dan Burstein
Dan Burstein
Used - Like New
Paperback
Orion Publishing Co
2010-07-15
432
140911998X
9781409119982
N/A
Book picture is for illustrative purposes only, actual binding, cover or edition may vary.
This is a used book - there is no escaping the fact it has been read by someone else and it will show signs of wear and previous use. Overall we expect it to be in very good condition, but if you are not entirely satisfied please get in touch with us.