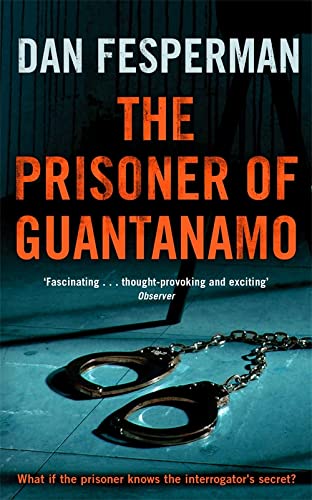 The Prisoner of Guantanamo
by Dan Fesperman

In Stock
£4.49
A superbly written, topical thriller from the award-winning author of THE SMALL BOAT OF GREAT SORROWS and THE WARLORD'S SON
Very Good
Only 3 left

The Prisoner of Guantanamo Summary

The Prisoner of Guantanamo by Dan Fesperman

Revere Falk is an FBI interrogator who believes it is possible to get more from a terrorist suspect by treating him decently than by using more 'robust' methods. He lives his life by a certain code of honour.

This puts him in a minority at Guantanamo Bay, Cuba.

So when the body of a US soldier is found under mysterious circumstances on the beach, and a high-ranking investigative team is flown in, Falk should be above suspicion.

But Falk has a secret, a secret he had hoped was dead and buried. Now, it is reaching out from his past, to the sodium-lit cell blocks and stifling humidity of this claustrophobic rumour-mill of a community, and its implications are greater than he could ever have imagined.

Dan Fesperman is already the winner of the CWA John Creasey and the Ian Fleming Steel Dagger awards. This, his fourth book, will surely be hailed as his best yet.

The Prisoner of Guantanamo Reviews

'A highly topical and intelligent thriller from the acclaimed author of The Small Boat of Great Sorrows. * The mystery and thriller book club *
I've always been a big fan of Dan Fesperman's intelligent novels and The Prisoner of Guantanamo is up to his usual standard ... fascinating ... a thought-provoking and exciting read * Observer *
Nothing can beat the Guantanamo prison camp for claustrophobic atmosphere ... An absorbing novel with some provocative commentary on America's war on terror * Susannah Yager, Sunday Telegraph *
Masterful...Here is the human cost of the war on terror, subtly delineated * Economist *
Masterful...Here is the human cost of the war on terror, subtly delineated * Economist *
A powerful thriller * Guardian *
Convincing * Mirror *
A superb spy thriller worthy of sharing shelf space with the novels of John le Carre and Ken Follett...darkly imaginative...draws a dramatic portrait * USA Today *
A neat sense of conspiratorial tension...Fesperman's use of spy tradecraft is good - even creative - and never more elaborate than the situation calls for * Washington Post *
One of the best writers of intelligent thrillers based on contemporary events working today...observant, thoughtful, witty * Baltimore Sun *
Fesperman taps another timely issue in his fourth topical thriller...a superb job * Publishers Weekly *
A new book by Dan Fesperman is becoming a major literary event . . . an utterly compelling thriller and quite simply the best I've read all year. * Sunday Telegraph on THE WARLORD'S SON *
A terrific novel of intrigue, duplicity and death in the shadow of the Khyber Pass . . . Fesperman is that rare journalist who is also a gifted novelist . . . THE WARLORD'S SON deserves the attention of anyone who is open to first-rate fiction about war, journalism and the dark, dangerous worlds called Pakistan and Afghanistan. * Washington Post on THE WARLORD'S SON *
Fesperman offers a level of cultural and political nuance not always found in adventure thrillers. * Booklist on THE WARLORD'S SON *
A first-rate geopolitical yarn . . . Fesperman combines his strong eye for detail with bleak film-noir cynicism, managing to make plot twists that could have felt contrived seem depressingly believable. * Entertainment Weekly on THE WARLORD'S SON *
Dan Fesperman has written that rare thing: a fine and intelligent novel that makes you think, and keeps you turning the pages. * Val McDermid on THE SMALL BOAT OF GREAT SORROWS *
In THE WARLORD'S SON, Dan Fesperman, an American foreign correspondent who covered the war in Afghanistan, succeeds in writing a convincing, accurate thriller . . . This book is worth reading if only for the passage where the hero, Skelly, glimpses Osama bin Laden at a public hanging; the scene both convinces and frightens. * The Economist on THE WARLORD'S SON *
One of the best writers of intelligent thrillers based on contemporary events working today...what makes the novel work is the attention to detail...but he's even better at creating the emotional atmosphere, the tedium and the tension, the paranoia and the boredom...observant, thoughtful, witty * Baltimore Sun *
'An intelligent thriller of some weight' * Bookseller *
Fesperman is the closest thing America has to John le Carre, a writer of great elegance and sophistication whose novels are as topical as they are compelling. In a market saturated by factory-made thrillers, Fesperman stands out as a spy novelist of the highest quality. * Charles Cumming *

Dan Fesperman, a war correspondent for the Baltimore Sun Times, has written three highly acclaimed previous novels of international suspense. He now lives in Baltimore with his family.

THE PRISONER OF GUANTANAMO was nominated by the International Association of Crime Writers for the Hammett Prize - winner yet to be announced.

GOR000619999
The Prisoner of Guantanamo by Dan Fesperman
Dan Fesperman
Used - Very Good
Paperback
Hodder & Stoughton General Division
2007-07-12
512
0340896825
9780340896822
N/A
Book picture is for illustrative purposes only, actual binding, cover or edition may vary.
This is a used book - there is no escaping the fact it has been read by someone else and it will show signs of wear and previous use. Overall we expect it to be in very good condition, but if you are not entirely satisfied please get in touch with us.