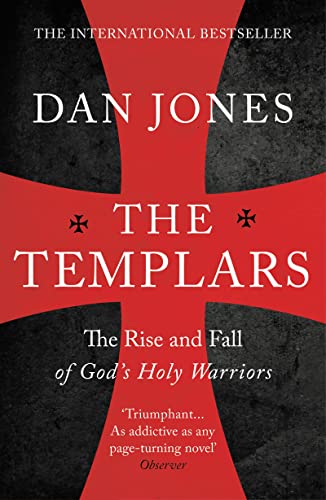 The Templars
by Dan Jones

The remarkable story of the Knights Templar - the wealthiest, most powerful and most secretive of the military orders that flourished in the crusading era.

The Templars by Dan Jones

The Knights Templar were the wealthiest, most powerful - and most secretive - of the military orders that flourished in the crusading era.

Their story - encompassing as it does the greatest international conflict of the Middle Ages, a network of international finance, a swift rise in wealth and influence followed by a bloody and humiliating fall - has left a comet's tail of mystery that continues to fascinate and inspire historians, novelists and conspiracy theorists.

'Exhilarating, epic, sword-swinging history ... A skilful storyteller [...] he enlivens the narrative with bloodcurdling details and arresting turns of phrase ... There is also fine scholarly intuition' TLS.
'A fresh, muscular and compelling history of the ultimate military-religious crusading order, combining sensible scholarship with narrative swagger, featuring a cast of exuberantly monstrous sword-swingers spattering Christian and Islamic blood from Spain to Jerusalem' Simon Sebag Montefiore, author of Jerusalem: The Biography.
'The story of the Templars, the ultimate holy warriors, is an extraordinary saga of fanaticism, bravery, treachery and betrayal, and in Dan Jones they have a worthy chronicler. The Templars is a wonderful book!' Bernard Cornwall, author of The Last Kingdom.
'Fast-paced narrative history depicted with irresistible verve, bloody battle scenes and moments of laugh-out-loud wit ... This is another triumphant tale from a historian who writes as addictively as any page-turning novelist' Observer.
'A fascinating story of fanaticism ... Jones is certainly an entertainer, but also a fine historian who knows how to render serious scholarship into accessible prose. Seldom does one find serious history that is so easy to read' The Times.
'Snappy, well-paced ... The author's ambition, he says, is to tell the story of the Templars in a straightforward way and "to write a book that will entertain as well as inform". He has done precisely that' Daily Telegraph.
'Told with all Jones's usual verve and panache, this is a dramatic and gripping tale of courage and stupidity, faith and betrayal' Mail on Sunday.
'When it comes to rip-roaring medieval narratives, Jones has few peers, and in the Templars he finds the perfect subject' The Sunday Times History Books of the Year.
'Full of tales of bloodshed, bravery and betrayal, this is a passionate guide to the unstoppable rise and spectacular fall of the poster boys of the Middle Ages' Tablet, Books of the Year.
'[The Templars'] colourful story is grippingly told by the excellent Dan Jones' Mail on Sunday.

Dan Jones is a broadcaster, award-winning journalist and pioneer of the resurgence of interest in medieval history. He is the bestselling author of Summer of Blood, The Plantagenets, Magna Carta and Realm Divided. He lives in London.

GOR009001714
The Templars by Dan Jones
Dan Jones
Used - Like New
Paperback
Head of Zeus
2018-03-29
512
1781858926
9781781858929
N/A
Book picture is for illustrative purposes only, actual binding, cover or edition may vary.
This is a used book - there is no escaping the fact it has been read by someone else and it will show signs of wear and previous use. Overall we expect it to be in very good condition, but if you are not entirely satisfied please get in touch with us.