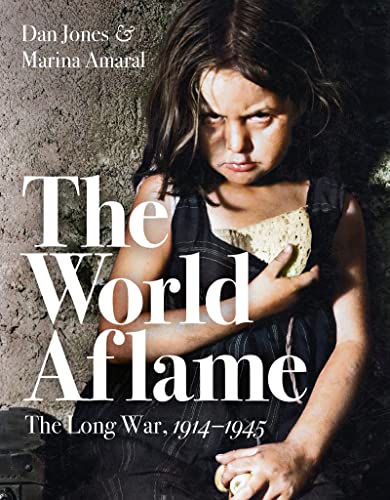 The World Aflame
by Dan Jones

A visually stunning history of global conflict from 1914 to 1945, from Dan Jones and Marina Amaral - the team who created The Colour of Time.

'Purists argue that colourising black and white photographs is sacrilege, but the world has always been in colour. Truth be told, monochrome is a contrivance. Human experience is always colourful' The Times.

The epic, harrowing and world-changing story - in words and colourized images - of global conflict from the assassination of the Archduke Franz Ferdinand to the obliteration of Hiroshima by the dropping of the first atom bomb. The World Aflame will embrace not only the total conflagrations of 1914-18 and 1939-45 and the international tensions, conflicting ideologies and malign economic forces that set them in train, but also the civil wars of the interwar period in Ireland and Spain, wars in Latin America, Britain's imperial travails in such places as Ireland, Somalia and Palestine, and events on the domestic 'fronts' of the belligerent nations.

Like The Colour of Time, The World Aflame is a collaboration between the gifted Brazilian artist Marina Amaral, and the leading British historian Dan Jones. Marina has created 200 stunning images, using contemporary photographs as the basis for her full-colour digital renditions. The accompanying narrative anchors each image in its context, weaving them into a vivid account of four decades of conflict that shaped the world we live in today.

A fusion of amazing pictures and well-chosen and informative words, The World Aflame offers a moving - and often terrifying - perspective on the bloodiest century in human history.

Reviews for THE COLOUR OF TIME:

'The most breathtakingly colourised black-and-white pictures ever' Daily Mail.

'I have long considered colourisation sacrilege ... after reading this book, I've changed my mind' The Times.

'[The Colour of Time] does something simple yet extraordinary. It takes black-and-white photos of historic events and colours them in. The effect is transformative' Daily Telegraph.

'A stunning book ... Quite extraordinary' The Bookseller.

'There is something of The Wizard of Oz about Marina Amaral's photographs. She whisks us from black-and-white Kansas to shimmering Technicolor Oz ... When you see Amaral's coloured portraits, you think: phwoar! ... She changes the way we see a period or a person' Spectator.

'The effect of colour is far more transformative than you might imagine ... [Amaral's] touched-up photographs look even more realistic, and closer to life, than a photograph taken yesterday ... Extraordinary' Mail on Sunday.

'Pictures brought to life as you've never seen them before' Sunday Post.

'[Amaral] breathes new life, immediacy and human connection into black-and-white pictures. Even familiar shots are transformed in a breathtaking way ... Even the casual reader leafing through these pages will be stopped in their tracks, connected to people from the past like never before - at last, in living colour' Irish News.

'Jones sketches with wry economy not only the historical context but the purpose of the photograph, from documented reality to shameless propaganda, from official portrait to candid snap ... There is much to enjoy here. As a history book, it acts as a fleeting guide to a tumultuous century. But as an aesthetic experiment it is remarkably successful' Daily Express.

'What also elevates The Colour of Time above regular coffee table fare is the startling vivacity and impact of the photographs chosen, and the concise but focused and gripping texts by Jones, making the book a worthwhile cover-to-cover read as much as it serves as a showcase book to dip into at will' All About History.

'For the first time, we are seeing the scenes in colour as images from a new book show how much changes but how much stays the same as history unfolds. Covering the years between 1914-1945, The World Aflame shows the planet gripped by wars, the rise of right-wing governments and a deadly pandemic' Sunday Post.
'You may need a strong stomach for some of the images, but they are immensely vivid, and Jones's text is crisp' Sunday Times.
'Amaral's colourisation process is most moving when applied to pictures of children. The addition of eye colour, skin tone, freckles - suddenly, they look like children you might know. And children, especially, relate to her colourised pictures because they are witnessing a reality that is more similar to their own, she says ... To see it more as the photographer saw it, and the way it actually was. The photographer might not have had the choice, or the technology, to take a picture in colour. But looking through the viewfinder, that's what they saw; the past - even its grimmest, darkest hours - was not in black and white' Guardian.
'"The world is fragile. It takes less than we think to set it aflame." So the historian Dan Jones writes, striking unintended contemporary parallels in his introduction to his second collaboration with the artist Marina Amaral, after The Colour of Time. In The World Aflame, the events of the first and second world wars - the so-called long war - are brought to vivid, startling life thanks to Amaral's skill at colourising contemporary images' Observer.
'Iconic photos of the First World War and WWII, as well as the intervening conflicts, have been brought to life in colour and given a new perspective to the bloodiest half-century in history' Daily Mail.
'While many can claim to show you Winston Churchill as he's never been seen before, this photograph is perhaps a true first' Discover Britain.
'To see Winston Churchill's youthful freckly face in 1911 is revelatory. In a single image, we see how far the journey was from a somewhat gadabout sea lord to Our National Saviour' Daily Express.

Marina Amaral is a talented Brazilian artist who specializes in the colourization of historical photographs and is the author of The Colour of Time.

Dan Jones is a historian and bestselling author of The Colour of Time, The Templars, Magna Carta and The Plantagenets.