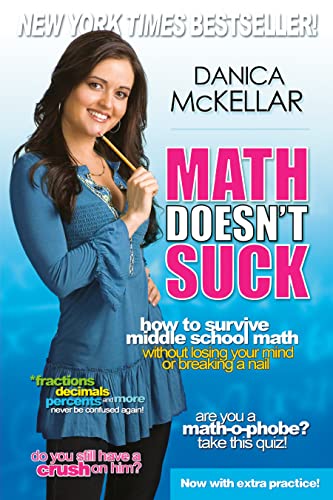 In Stock
£6.99
In this national bestseller, actress and internationally recognized mathematician McKellar ("The Wonder Years") shows middle-school girls that math can be easy, relevant, and even glamorous, and provides them with the tools to ace their next test. Illustrations.
Very Good Good
Only 1 left

Math Doesn't Suck: How to Survive Middle School Math Without Losing Your Mind or Breaking a Nail by Danica McKellar

From actress and math genius Danica McKellar comes a groundbreaking guide to mathematics for middle school girls, their parents, and educators.

As the math education crisis in this country continues to make headlines, research continues to prove that it is in middle school when math scores begin to drop--especially for girls--in large part due to the relentless social conditioning that tells girls they "can't do" math, and that math is "uncool." Young girls today need strong female role models to embrace the idea that it's okay to be smart!

It's Danica McKellar's mission to be this role model, and demonstrate on a large scale that math doesn't suck. In this fun and accessible guide, McKellar--dubbed a "math superstar" by The New York Times--gives girls and their parents the tools they need to master the math concepts that confuse middle-schoolers most, including fractions, percentages, pre-algebra, and more.

The book features hip, real-world examples, step-by-step instruction, and engaging stories of Danica's own childhood struggles in math (and stardom). It even includes a Math Horoscope section, Math Personality Quizzes, and Real-Life Testimonials--ultimately revealing why math is easier and cooler than readers think.

"McKellar...may well have done more to encourage girls to stick with math than any government task force...the wildly enthusiastic response [her books] have received speaks to the effect that can be achieved by reworking the contents of standard math and science problems and countering the perception that boys won't like girls who are smart."--Eileen Pollack, The New York Times

"Exhorts her female readers not to fall prey to others' low expectations, especially expectations that are based on deeply ingrained stereotypes stemming from one's appearance...McKellar genuinely wants to change the way girls view intelligence and, more importantly, themselves...McKellar hopes to revise the girly image of dim-bulbs with a new formulation: Smart is sexy. And that's an equation we all can understand."--Erica Stalnecker, National Review

Danica McKellar is a New York Times bestselling author of groundbreaking math books, including Math Doesn't Suck: How to Survive Middle School Math, Girls Get Curves: Geometry Takes Shape, Kiss My Math: Showing Pre-Algebra Who's Boss, Hot X: Algebra Exposed!, and the Goodnight, Numbers series of children's books, and is a summa cum laude graduate of UCLA with a degree in mathematics. She is also well known for her acting roles on The Wonder Years, The West Wing, and multiple Hallmark Channel movies, and as a quarterfinalist on Dancing with the Stars. She lives with her family in Los Angeles.

GOR002822277
Math Doesn't Suck: How to Survive Middle School Math Without Losing Your Mind or Breaking a Nail by Danica McKellar
Danica McKellar
Used - Very Good
Paperback
Penguin Putnam Inc
2008-07-01
296
0452289491
9780452289499
N/A
Book picture is for illustrative purposes only, actual binding, cover or edition may vary.
This is a used book - there is no escaping the fact it has been read by someone else and it will show signs of wear and previous use. Overall we expect it to be in very good condition, but if you are not entirely satisfied please get in touch with us.