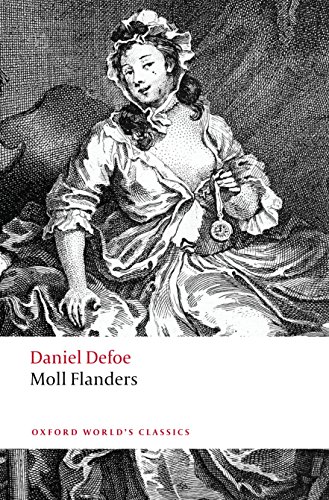 Used Price
£4.99
New RRP £5.99
Free Shipping in the UK
Moll Flanders - whore, wife, thief, felon, penitent - tells the racy tale of her life in Defoe's extraordinary novel. An account of opportunism, endurance, and survival that speaks as strongly today as it did to its first readers, this new edition provides a full introduction and notes to explore the book's eighteenth-century context.
Reviews:
Trustpilot
Very Good Good

'Twelve Year a Whore, fives times a Wife (whereof once to her own Brother), Twelve Year a Thief, Eight Year a Transported Felon in Virginia, at last grew Rich, liv'd Honest, and died a Penitent' So the title page of this extraordinary novel describes the career of the woman known as Moll Flanders, whose real name we never discover. And so, in a tour-de-force of writing by the businessman, political satirist, and spy Daniel Defoe, Moll tells her own story, a vivid and racy tale of a woman's experience in the seamy side of life in late seventeenth- and early eighteenth-century England and America. Born in Newgate prison, and seduced in the home of her adoptive family, she learns to live off her wits, defying the traditional depiction of women as helpless victims. First published in 1722, and one of the earliest novels in the English language, its account of opportunism, endurance, and survival speaks as strongly to us today as it did to its original readers. ABOUT THE SERIES: For over 100 years Oxford World's Classics has made available the widest range of literature from around the globe. Each affordable volume reflects Oxford's commitment to scholarship, providing the most accurate text plus a wealth of other valuable features, including expert introductions by leading authorities, helpful notes to clarify the text, up-to-date bibliographies for further study, and much more.

G. A. Starr is Professor of English at the University of California, Berkeley. Linda Bree is Editorial Director, Arts and Literature, at Cambridge University Press.

GOR003486761
Moll Flanders by Daniel Defoe
Daniel Defoe
Oxford World's Classics
Used - Very Good
Paperback
Oxford University Press
2011-02-10
384
0192805355
9780192805355
N/A
Book picture is for illustrative purposes only, actual binding, cover or edition may vary.
This is a used book - there is no escaping the fact it has been read by someone else and it will show signs of wear and previous use. Overall we expect it to be in very good condition, but if you are not entirely satisfied please get in touch with us.