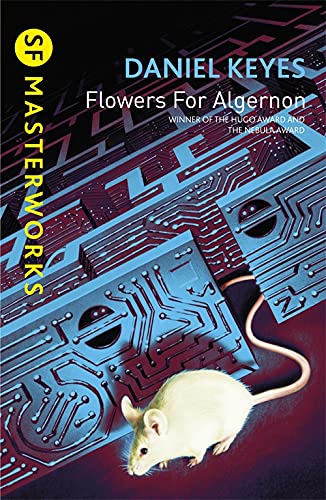 Flowers For Algernon
by Daniel Keyes

Flowers For Algernon by Daniel Keyes

The classic novel about a daring experiment in human intelligence Charlie Gordon, IQ 68, is a floor sweeper and the gentle butt of everyone's jokes - until an experiment in the enhancement of human intelligence turns him into a genius. But then Algernon, the mouse whose triumphal experimental tranformation preceded his, fades and dies, and Charlie has to face the possibility that his salvation was only temporary.

This is one of the greats: a story and a central character that have stayed with me for thirty years, from the first moment I picked it up * Conn Iggulden *
A masterpiece of poignant brilliance . . . heartbreaking, and utterly, completely brilliant * Guardian *
A timeless tearjerker * Independent *
Excellent . . . extremely moving * The Encyclopedia of Science Fiction *
Unflinchingly honest . . . it will make you reflect on your own life . . . and completely and utterly break your heart * Guardian Online *
A narrative tour de force, very moving, beautiful and remorseless in its simple logic * Science Fiction, 100 Best Novels *
Strikingly original * Publishers Weekly *
A tale that is convincing, suspectful and touching * New York Times *

Daniel Keyes (1927-2014)
Born in 1927 Daniel Keyes joined the US merchant marine aged 17. He won the Hugo for the short story that Flowers for Algernon was based on and the Nebula for the novel itself. He has a masters degree in English and American literature and is a Professor of English and Creative writing. He died in June, 2014.