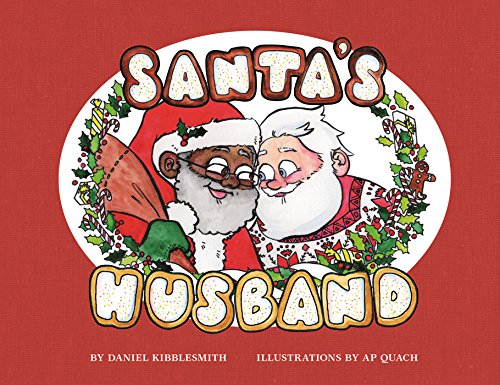 In Stock
£8.49
"Offering a fresh twist on Kris Kringle, a clever yet heartfelt book that tells the story of a black Santa, his white husband, and their life in the North Pole. Everyone knows that Santa Claus is jolly, but in Santa's Husband, this cherished symbol of the holiday season is also black and gay, and married to an equally cheery man"--Amazon.com.
Very Good
Only 1 left

Offering a fresh twist on Kris Kringle, a clever yet heartfelt book that tells the story of a black Santa, his white husband, and their life in the North Pole. Everyone knows that Santa Claus is jolly, but in Santa's Husband, this cherished symbol of the holiday season is also black and gay, and married to an equally cheery man. In this witty and sweet illustrated Christmas tale, humor writer Daniel Kibblesmith introduces us to Mr. and Mr. Claus, and gives us a glimpse of their lives together. We see the Clauses sitting by the fire at their cozy North Pole home, vacationing at the beach, having an occasional disagreement, celebrating their wedding day, and comforting each other when some loudmouth people on television angrily dispute Santa's appearance and lifestyle. In the weeks before Christmas, Santa's husband helps with all the pre-Christmas work, from double-checking lists, to feeding the reindeer (organic gluten-free grains, of course), to negotiating labor disputes with the restive workshop elves. At the height of toy-making season, he even fills in for his busy hubby at the mall to ensure every child can meet the Big Guy in the red suit, and give him their wish list. As this charming book reminds us, Santa Claus can come in all shapes and colors and sizes-just like the children and families he visits all over the world each Christmas eve. Featuring beautiful watercolor pictures drawn by artist AP Quach, Santa's Husband is a delightful gift for readers of all ages.

"A genuinely sweet story that depicts a sound, joyful marriage." -- Vice.com
"We all know that Santa is white and heterosexual, right? Oh wait, he's a magical imaginary fat dude who breaks into your house every year to leave your kids presents, he can be whatever you want him to be!" -- Out.com
"It's the perfect gift for your racist/homophobic uncle!" -- World of Wonder/WOW Report
"[An] enlightened account of the Kris Kringle legend... [with] deftly rendered drawings." -- Edge Media Network

Daniel Kibblesmith is an Emmy-nominated writer from Oak Park, Illinois. He is a staff writer for The Late Show with Stephen Colbert and a founding editor of ClickHole. He has written comics for Valiant Comics and D.C. Comics, and comedy for The New Yorker, McSweeney's, Onion News Network, and Funny or Die. He is the author of Santa's Husband and co-author of the humor book How to Win at Everything. He works and lives in New York City. Ashley Quach is an illustrator in Los Angeles who lives in a house that's almost a hundred years old. She started drawing comics to amuse her students when she was an art teacher. Since then, she's drawn hundreds of comics, including the Internet hit Boys' Night and the wordless spooky story Weirdy. She is ambidextrous and can draw upside down.

GOR009955134
Santa's Husband by Daniel Kibblesmith
Daniel Kibblesmith
Used - Very Good
Hardback
HarperCollins Publishers Inc
2017-11-16
32
0062748742
9780062748744
N/A
Book picture is for illustrative purposes only, actual binding, cover or edition may vary.
This is a used book - there is no escaping the fact it has been read by someone else and it will show signs of wear and previous use. Overall we expect it to be in very good condition, but if you are not entirely satisfied please get in touch with us.