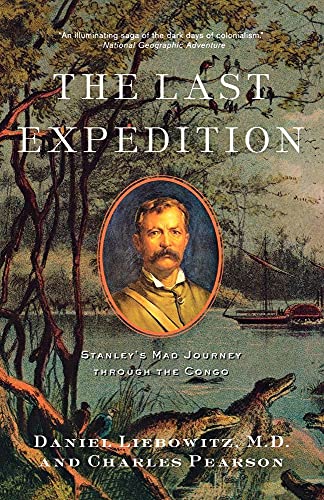 The Last Expedition
by Daniel Liebowitz

In Stock
£5.49
A noble rescue mission descends into a nightmare of cruelty, starvation, and cannibalism, bringing to a close the European exploration of Africa. "Liebowitz and Pearson have written an illuminating saga of the dark days of colonialism."-National Geographic Adventure
Very Good
Only 1 left

The Last Expedition: Stanley's Mad Journey through the Congo by Daniel Liebowitz

Henry Morton Stanley undertook the greatest African expedition of the nineteenth century to rescue Emin Pasha, last lieutenant of the martyred General Gordon and governor of the southern Sudan. Emin had been cut off by an Islamic jihad to the north and was at the mercy of brutal slave traders. Instead of ten months, the trip took three years and cost the lives of thousands of people, as Stanley's column hacked its way across the last great, unexplored territory in Africa.

Stanley's secret agenda was territorial expansion on the model of Leopold's Congo or the British East India Company, and what is revealed so vividly in the diaries of those who accompanied him is the dark underside of both the man and the colonial impulse. The expedition took whatever it wanted from the Africans, and when Africans were killed defending their possessions, they didn't even rate an entry in Stanley's journal.

"An in-depth and fascinating account of this eminent explorer who, we learn, had his dark side." -- George Cohen - Booklist

GOR004987561
The Last Expedition: Stanley's Mad Journey through the Congo by Daniel Liebowitz
Daniel Liebowitz
Used - Very Good
Paperback
WW Norton & Co
2009-03-13
400
0393328732
9780393328738
N/A
Book picture is for illustrative purposes only, actual binding, cover or edition may vary.
This is a used book - there is no escaping the fact it has been read by someone else and it will show signs of wear and previous use. Overall we expect it to be in very good condition, but if you are not entirely satisfied please get in touch with us.