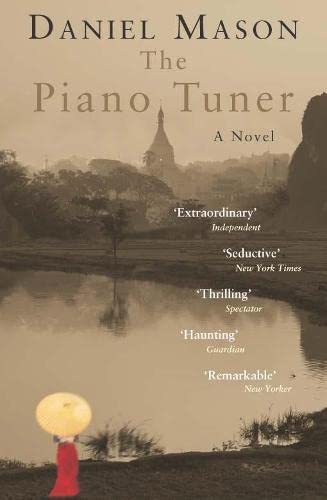 The Piano Tuner
by Daniel Mason

In Stock
£3.99
A hypnotic tale of myth, romance and self-discovery.
Very Good Good
10 in stock

The Piano Tuner by Daniel Mason

On a misty London afternoon in 1886, piano tuner Edgar Drake receives a strange request from the War Office: he must leave his wife, and his quiet life in London, to travel to the jungles of Burma to tune a rare Erhard grand piano. The piano belongs to Surgeon-Major Anthony Carroll, an enigmatic British officer, whose success at making peace in the war-torn Shan States is legendary, but whose unorthodox methods have begun to attract suspicion.

So begins the journey of the soft-spoken Edgar across Europe, the Red Sea, India, Burma, and at last into the remote highlands of the Shan States. En route he is entranced by the Doctor's letters and by the shifting cast of tale-spinners, soldiers and thieves who cross his path.

As his captivation grows, however, so do his questions: about the Doctor's true motives, about an enchanting and elusive woman who travels with him into the jungle, about why he came. And, ultimately, whether he will ever be able to return home unchanged to the woman who awaits him there . . .

Sensuous and lyrical, rich with passion and adventure, THE PIANO TUNER is an unforgettable and haunting novel.

Daniel Mason received his bachelor's degree in biology at Harvard in 1998 and spent a year studying malaria on the Thailand-Myanmar border, where much of his debut, The Piano Tuner, was written. He studied medicine at the University of California, San Francisco.

GOR000493008
The Piano Tuner by Daniel Mason
Daniel Mason
Used - Very Good
Paperback
Pan Macmillan
2004-01-02
368
0330492691
9780330492690
N/A
Book picture is for illustrative purposes only, actual binding, cover or edition may vary.
This is a used book - there is no escaping the fact it has been read by someone else and it will show signs of wear and previous use. Overall we expect it to be in very good condition, but if you are not entirely satisfied please get in touch with us.