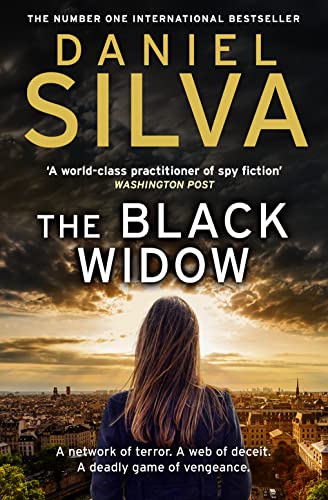 The Black Widow
by Daniel Silva

The Black Widow by Daniel Silva

Legendary spy Gabriel Allon is poised to become the chief of Israel's secret intelligence service. But on the eve of his promotion, ISIS detonate a massive bomb in the Marais district of Paris, and a desperate French government wants Gabriel to eliminate the man responsible.

They call him Saladin...

He is a terrorist mastermind, whose network communicates in total secrecy, leaving Gabriel no choice but to insert an agent into the most dangerous terrorist group the world has ever known. An extraordinary young doctor, she must pose as an ISIS recruit in waiting, a ticking time bomb, a black widow out for blood.

Praise for The Black Widow:

`Not only gripping but works as an IS history primer' Sun

`It is Silva's creative genius that keeps it all moving, as well as his mastery of storytelling that keeps the intense momentum of the plot ever pushing forward' Huffington Post

`A fitting final mission for one of fiction's greatest spies... A dark thriller for difficult times' Kirkus Review

`Silva builds suspense like a symphony conductor... A winner on all fronts' Booklist

`Silva is a master of suspense' Barbara Taylor Bradford, The Week

Daniel Silva is the award-winning, number one New York Times bestselling author of The Unlikely Spy, The Mark of the Assassin, The Marching Season, The Kill Artist, The English Assassin, The Confessor, A Death in Vienna, Prince of Fire, The Messenger, The Secret Servant, Moscow Rules, The Defector, The Rembrandt Affair, Portrait of a Spy, The Fallen Angel, The English Girl, The Heist and The English Spy. His books are published in more than thirty countries and are bestsellers around the world. He serves on the United States Holocaust Memorial Council and lives in Florida with his wife, Jamie Gangel, and their two children, Lily and Nicholas.

GOR008607221
The Black Widow by Daniel Silva
Daniel Silva
Used - Very Good
Paperback
HarperCollins Publishers
2017-07-13
560
0007552386
9780007552382
N/A
Book picture is for illustrative purposes only, actual binding, cover or edition may vary.
This is a used book - there is no escaping the fact it has been read by someone else and it will show signs of wear and previous use. Overall we expect it to be in very good condition, but if you are not entirely satisfied please get in touch with us.