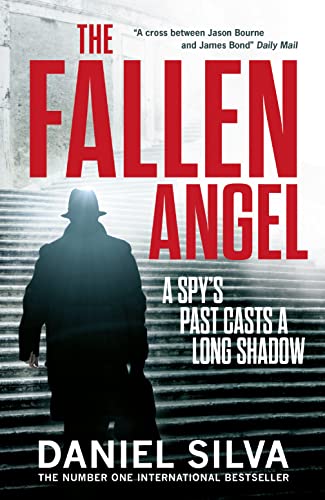 The Fallen Angel
by Daniel Silva

Gabriel Allon, master art restorer and assassin, returns in a spellbinding No.1 New York Times bestselling novel. For all fans of Robert Ludlum.

The Fallen Angel by Daniel Silva

Gabriel Allon, master art restorer and assassin, returns in a spellbinding No.1 New York Times bestselling novel. For all fans of Robert Ludlum.

Bruised and war-weary following his secret war to bring down a terrorist mastermind, Gabriel Allon returns to his beloved Rome to restore a Caravaggio masterpiece.

But early one morning Gabriel is summoned by his friend and occasional ally Monsignor Luigi Donati, the all-powerful private secretary to the Pope. The broken body of a beautiful woman lies beneath Michelangelo's magnificent dome. Donati fears a public inquiry will inflict more wounds on an already-damaged Church so he calls upon Gabriel to use his matchless talents and experience to quietly pursue the truth - was it suicide, or something more sinister?

Gabriel discovers that the woman revealed a dangerous secret that threatens powers beyond the Vatican. And an old enemy plots revenge in the shadows, an unthinkable act of sabotage that will plunge the world into a conflict of apocalyptic proportions. Once again Gabriel must return to the ranks of his old intelligence service-and place himself, and those he holds dear, on the razor's edge of danger.

Daniel Silva is the number one New York Times bestselling author of The Unlikely Spy, The Mark of the Assassin, The Marching Season, The Kill Artist, The English Assassin, The Confessor, A Death in Vienna, Prince of Fire, The Messenger, The Secret Servant, Moscow Rules, The Defector, The Rembrandt Affair, and Portrait of a Spy. He is married to NBC News Today correspondent Jamie Gangel; they live in Washington, D.C., with their two children, Lily and Nicholas. In 2009 Silva was appointed to the United States Holocaust Memorial Council.

GOR004989043
The Fallen Angel by Daniel Silva
Daniel Silva
Used - Very Good
Paperback
HarperCollins Publishers
2013-06-06
416
0007433360
9780007433360
N/A
Book picture is for illustrative purposes only, actual binding, cover or edition may vary.
This is a used book - there is no escaping the fact it has been read by someone else and it will show signs of wear and previous use. Overall we expect it to be in very good condition, but if you are not entirely satisfied please get in touch with us.