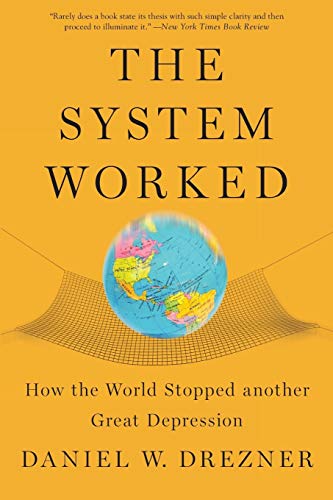 International institutions, from the International Monetary Fund to the International Olympic Committee, are perceived as bastions of sclerotic mediocrity at best and outright corruption at worst, and this perception is generally not far off the mark. In the wake of the 2008 financial crash, Daniel W. Drezner, like so many others, looked at the smoking ruins of the global economy and wondered why global economic governance structure had failed so spectacularly, and what could be done to reform them in the future. But then a funny thing happened. As he surveyed their actions in the wake of the crash, he realized that the evidence pointed to the exact opposite conclusion: global economic governance had succeeded. In The System Worked, Drezner, a renowned political scientist and international relations expert, contends that despite the massive scale and reverberations of this latest crisis (larger, arguably, than those that precipitated the Great Depression), the global economy has bounced back remarkably well. Examining the major resuscitation efforts by the G-20 IMF, WTO, and other institutions, he shows that, thanks to the efforts of central bankers and other policymakers, the international response was sufficiently coordinated to prevent the crisis from becoming a full-fledged depression. Yet the narrative about the failure of multilateral economic institutions persists, both because the Great Recession affected powerful nations whose governments managed their own economies poorly, and because the most influential policy analysts who write the books and articles on the crisis hail from those nations. Nevertheless, Drezner argues, while it's true that the global economy is still fragile, these institutions survived the "stress test" of the financial crisis, and may have even become more resilient and valuable in the process. Bucking the conventional wisdom about the new "G-Zero World," Drezner rehabilitates the image of the much-maligned international institutions and demolishes some of the most dangerous myths about the financial crisis. The System Worked is a vital contribution to our understanding of an area where the stakes could not be higher.

If you find yourself disagreeing with Drezner, you need to take a good hard look at yourself and what you are doing with your life... this detailed, knowledgeable and cogent book is required reading for everyone in the global governance field, and anyone who wants to know how, bad though things have been since the global financial crisis, they might have been a hell of a lot worse. * Alan Beattie, Financial Times *
Most analyses of the way in which countries work together to tackle international problems conclude with scathing and often justified critiques. In this original and well-written book Daniel Drezner shows how in the recent financial crisis, 'the system worked.' This book is full of surprising insights and important policy ideas. * Moises Naim, Scholar, Carnegie Endowment and author of The End of Power *
Is today's global system of economic governance broken? The overwhelming consensus among experts and pundits, writing in the aftermath of the 2008 financial crisis, is that it is... In this astute and sharply argued book, Daniel Drezner begs to differ. In a detailed survey of international responses to the Great Recession, Drezner makes a convincing case that global institutions * the G20, IMF, WTO, and IMF *
This new and excellent book by Daniel Drezner provides the best take on what we did right and why the world did not fall into a global great depression. * Tyler Cowen, Marginal Revolution *
The System Worked is a smart, thoughtful, and important book that I largely disagree with... Drezner has put forward an argument to be reckoned with, and it is more important that the book find an audience among those who disagree with its conclusions. * Jonathan Kirsch, Boston Review *
Drezner offers a thoughtful and contemporary analysis of global governing systems and their underlying politics. * National Journal *

Daniel W. Drezner is professor of International Politics at the Fletcher School of Law and Diplomacy at Tufts University, a nonresident senior fellow at the Brookings Institution. He has previously held positions with Civic Education Project, the RAND Corporation, and the U.S. Department of the Treasury. He is the author of four previous books, most recently Theories of International Politics and Zombies.