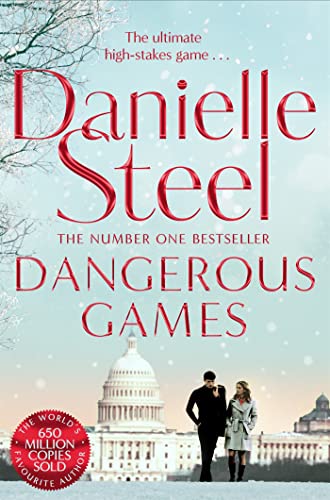 Dangerous Games is a thrilling tale of political scandal by the world's favourite storyteller, Danielle Steel.

Danielle Steel tackles major political scandal and a power crisis in the White House in her gripping bestseller, Dangerous Games.

TV journalist Alix Phillips is always willing to put herself on the frontline for her job. All that matters is getting the story.

After a personal tragedy, only her beloved mother and daughter are allowed to get close. And her cameraman, Ben. Neither of them fears death - it's love that is more terrifying.

When Alix's boss suspects a major political scandal in the White House involving the Vice-President, he sends Alix to uncover the truth. This story could blow the corridors of power wide open, and this time Alix is feeling the heat.

But when Alix receives some shocking news, she must make a decision about where real happiness lies. Those she loves are at risk.

For someone who was never scared, Alix now realizes that the time has come to play some very dangerous games.

Danielle Steel has been hailed as one of the world's most popular authors, with nearly a billion copies of her novels sold. Her many international bestsellers include Against All Odds, The Duchess and The Right Time. She is also the author of His Bright Light, the story of her son Nick Traina's life and death; A Gift of Hope, a memoir of her work with the homeless; and the children's books Pretty Minnie in Paris and Pretty Minnie in Hollywood. Danielle divides her time between Paris and her home in northern California.
GOR008812749
9781509800117
1509800115
Dangerous Games by Danielle Steel
Danielle Steel
Used - Very Good
Paperback
Pan Macmillan
2017-09-28
352
N/A
Book picture is for illustrative purposes only, actual binding, cover or edition may vary.
This is a used book - there is no escaping the fact it has been read by someone else and it will show signs of wear and previous use. Overall we expect it to be in very good condition, but if you are not entirely satisfied please get in touch with us
Trustpilot