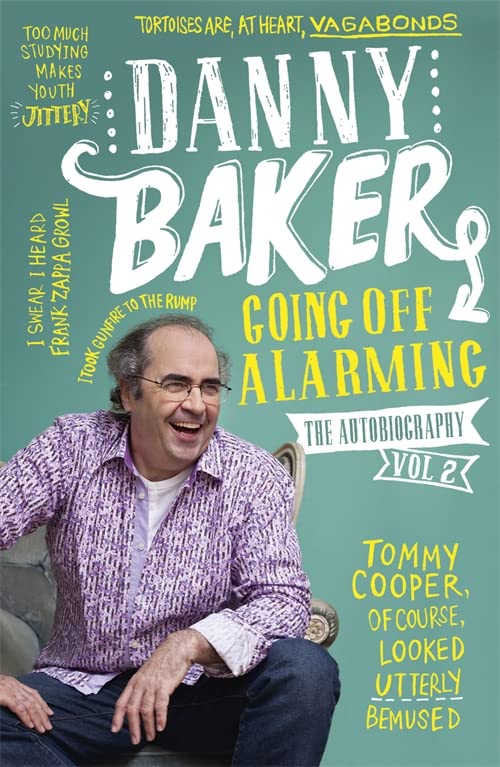 Going Off Alarming by Danny Baker

Going Off Alarming: The Autobiography: Vol 2 by Danny Baker

Since my first book was published I have had countless friends and family members get in touch to say how come I hadn't included this story or that tale. Was I ashamed of being shot twice, once up the arse, in Jamaica Road? How long should a man live with such a secret? If by retrospectively dropping my trousers every few pages I can reveal a fuller picture of myself during these years, then so be it.

Besides. Being shot up the arse. In front of your mates.

What else did I forget?

From presenting cheeky trivia on teatime telly to a disastrous panto sting, he's like a living poster of Kipling's If, happily talking over both Triumph and Disaster. ...his own talents, at least as a memoirist, are closer to that other driven south Londoner Spike Milligan. -- Steve Jelbert * INDEPENDENT ON SUNDAY *

Going Off Alarming is quite simply the funniest book you'll read all year. Seriously.
...Like its predecessor, the book is a hoot from soup to nuts, easily as funny, as self-deprecating and as worldly-wise as The Moon's A Balloon by David Niven. If you have been unlucky in life, and have spent the bulk of it without coming into contact with him or his work, then this book is a wonderful introduction. What's it like? Well, it's like Tom and Jerry written by a Cockney Roddy Doyle on Prozac. But funnier.

-- Dylan Jones * GQ ONLINE *
..great company and a brilliant raconteur. -- Viv Groskop * THE OBSERVER *
Volume two of Baker's autobiography rattles along at the same delightful and dizzying pace as its predecessor. ..Baker loves a tale told at his own expense and they come thick and fast. He writes like he speaks, with hyperactive garrulity and a rhetorical flourish. ..there is something about Baker in full flow that is affirming. Book three will doubtless be out for next Christmas but, when it comes to the Pangloss of Deptford, you are happy to forgive him the indulgence. -- Duncan White * DAILY TELEGRAPH *
For comic value, go for Danny Baker's latest memoir. The funniest book Dylan Jones has read all year. -- Olivia Cole * GQ *
It's the strength of the anecdotes, and welcome digressions from the narrative, that make the book such a delight. * CHOICE MAGAZINE *
Any autobiography that opens with the author being shot in the buttocks demands your complete attention. This book made me howl with laughter -- Lorraine Kelly * HERALD SCOTLAND *

Danny Baker was born in Deptford in south-east London and has been a comedy writer, journalist, radio DJ and screenwriter for 30 years. He has won four SONY AWARDs, most recently in 2013 for his weekly BBC Radio 5 Live show.

GOR007167151
9781780226088
178022608X
Going Off Alarming: The Autobiography: Vol 2 by Danny Baker
Danny Baker
Used - Very Good
Paperback
Orion Publishing Co
2015-11-19
272
N/A
Book picture is for illustrative purposes only, actual binding, cover or edition may vary.
This is a used book - there is no escaping the fact it has been read by someone else and it will show signs of wear and previous use. Overall we expect it to be in very good condition, but if you are not entirely satisfied please get in touch with us
Trustpilot