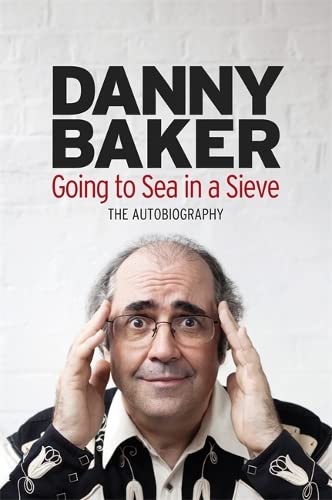 Going to Sea in a Sieve
by Danny Baker

Going to Sea in a Sieve Summary

Going to Sea in a Sieve: The Autobiography by Danny Baker

Born in 1957 in Deptford, south London, Danny's first job after dropping out of school at the age of 15 was in One Stop Records, a small record shop in London's West End, frequented by Elton John and Mick Jagger, a store rather like the one in High Fidelity. His career in print journalism began in 1976 when he co-founded the fanzine Sniffin' Glue leading to an offer from the New Musical Express, where his first job was as a receptionist. Soon after, Baker was contributing regular astute articles, reviews and later interviews to the publication. Danny then began making 30-minute documentaries at LWT for the cult series 20th Century Box, and appeared in two television commercials: Daz washing powder and Mars bar chocolate.

His stellar career on the radio began on BBC GLR in 1989, then moved to BBC Radio 5 where he presented sports shows including the groundbreaking 6-0-6, which still influences the media's approach to criticism of players, managers and referees. He also worked on BBC Radio 1, back to BBC GLR, Talk Radio and later on Virgin Radio. On his return to BBC last May, Danny won 'Sony Radio Personality of the Year' and appeared on Desert Island Discs last July. Six months earlier he had gone public on his cancer and chemotherapy treatment, and thankfully all seems well.

Danny Baker currently presents a weekday show at BBC London 94.9, which features phone-ins and discussions with his on-air team regarding music and entertainment of the 1960s and 1970s, and a Saturday morning show on BBC Radio 5.

This book charts Danny's showbiz career, the highs and lows, and everything in between, including the accusation that he killed Bob Marley...

Going to Sea in a Sieve Reviews

Full of warmth and laughter -- Ian Hyland * Daily Mirror *
Joie de vivre, this Teflon spirit, is the engine that drives this memoir....Indeed, throughout this tome, Baker doesn't so much drop famous names as fire them at you with a cannon for seemingly no other reason than to amuse and entertain with top-notch anecdotes... This book is a hoot, buzzing with Baker's impressive recall and nuclear-strength warmth and humour. Going to Sea in a Sieve emerges not only as a portrait of Baker the individual, but also as a hymn to bygone times that is as affectionate as it is brutally unsentimental and hilarious. The perfect read for anyone interested in music, football, media, British cultural history, or indeed just having a really good laugh. -- Barbara Ellen * THE OBSERVER *
Like its author, Baker's book is garrulous, preening, self-mocking and funny. It's as rattling to read as it evidently was to write. In the proud Baker tradition, it's a bit of a knockout. -- Stephen Smith * NEW STATESMAN *
These memoirs, which cover his childhood and early career burst with warmth and encounters with the famous, from Marc Bolan to Kate Bush. * BELFAST TELEGRAPH *
An instant ray of sunshine in these dank days of winter. * METRO *
Witty, sharp and hilarious, it's like you're chatting with a mate in the pub. * METRO *
A beautifully written memoir * THE INDEPENDENT *
Baker writes as he speaks, with honesty and infectious joie de vivre. * SUNDAY EXPRESS *
Rollicking first instalment of the life story of the broadcaster, covering his childhood in southeast London's Deptford and working as a pop critic and a 'yoof-for-hire' on TV. * SAGA *
Reading Baker's memoirs feels a bit like flying transatlantic with an irrepressibly garrulous stranger....the alacrity and invention of his mind is obvious. -- James McNair * Mojo *
I'm 50 pages into Danny Baker's Going to Sea in a Sieve and it's making me bark. -- Caitlin Moran * The Observer Books of the Year 2012 *

GOR004414025
Going to Sea in a Sieve: The Autobiography by Danny Baker
Danny Baker
Used - Very Good
Hardback
Orion Publishing Co
2011-09-15
272
0297863401
9780297863403
N/A
Book picture is for illustrative purposes only, actual binding, cover or edition may vary.
This is a used book - there is no escaping the fact it has been read by someone else and it will show signs of wear and previous use. Overall we expect it to be in very good condition, but if you are not entirely satisfied please get in touch with us.