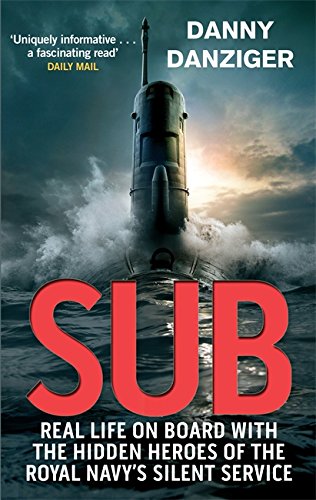 A fascinating insight into life aboard a British Naval submarine.

Sub: Real Life on Board with the Hidden Heroes of the Royal Navy's Silent Service by Danny Danziger

Stealthy, and deadly, the nuclear submarines of the Royal Navy lie in wait in the depths of the world's oceans, ready to listen, intercept, and attack wherever they may be needed - from the coastline of Libya to the ice caps of the Arctic. If the UK is hit by a devastating nuclear strike, they'll be the last military force standing.

Award-winning journalist Danny Danziger has been allowed unprecedented access to the elite crew of one of the UK's attack class submarines, joining them on operations and hearing their stories. Unrestricted, and uncompromising, Sub paints a vivid picture of this fascinating, little-known branch of our armed forces.

In an increasingly unstable world, these are the people who keep us safe. It is time for the silent service to be heard.

A fascinating read, not just the technical information about the boat, but the very human stories of those inside it * Daily Mail *
Danny Danziger's The Year 1000 went to number one and stayed on the bestseller list for seven months. Danny has a weekly interview column in the Sunday Times: Best of Times, Worst of Times, which over twelve years has won many accolades and awards.
GOR011154976
9780751545937
0751545937
Sub: Real Life on Board with the Hidden Heroes of the Royal Navy's Silent Service by Danny Danziger
Danny Danziger
Used - Like New
Paperback
Little, Brown Book Group
2012-01-19
320
N/A
Book picture is for illustrative purposes only, actual binding, cover or edition may vary.
The book has been read, but looks new. The book cover has no visible wear, and the dust jacket is included if applicable. No missing or damaged pages, no tears, possible very minimal creasing, no underlining or highlighting of text, and no writing in the margins
Trustpilot