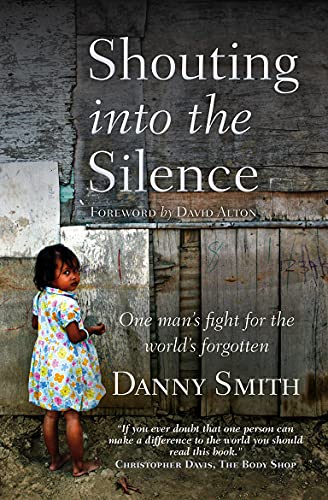 Shouting into the Silence by Danny Smith

One man's battle on behalf of children - from the brothels of the Philippines to the streets of India.

Shouting into the Silence: One man's fight for the world's forgotten by Danny Smith

Torture, sexual abuse, cruelty - children and adults are in danger all over the world, often because no-one is prepared to speak on their behalf. Occasional voices do cry out - and, for quarter of a century, one of the strongest has been that of Danny Smith. In 1981, he set out to free seven people, trapped in Cold War Moscow, but he didn't stop there. From the sleazy streets of the Philippines, via the jungles of Burma and the dying rooms of China, to the heat of Uganda, Danny has uncovered sexual abuse, poverty, persecution, trafficking, and child sacrifice. He has worked tirelessly alongside undercover reporters for the BBC, ITV, and other international media outlets; campaigned to change laws in the UK and elsewhere; and rescued children from a lifetime of prostitution in India. Allies in his battles have included George and Olivia Harrison, Billy Connolly, journalists, politicians, world leaders, and thousands of ordinary people who believed him when he said that something could be done. This is Danny Smith's story of over twenty-five years of making a noise.
"If you ever doubt that one person can make a difference to the world you should read this book. It reminded me that if you act with courage, are driven by belief in justice and a big and kind heart, you can be the change you want to see in the world. Danny Smith's story is an inspiration and this book is a must read for a new generation of activists." -- Christopher Davis, The Body Shop
"An eye-opening mega-motivating story that will inspire vision, faith and action. Salt and light ministry at its best. Let's not just read this but give it to others. If this does not inspire you, then you may want to see your doctor." -- George Verwer, Operation Mobilisation
"Thank you for campaigning for me when I was in prison." -- Chen Guangcheng, Chinese lawyer and human rights activist
"I have never read anything like this! Shouting into the Silence will take you on an incredible journey with Danny, as he quite literally fights for the rights of other human beings across the world. Looking at some famous cases and some lesser-known tales you won't be able to put this moving and shocking book down. Shouting into the Silence inspired me and it will inspire you - a must read." -- Marc Carey, Hard Rock
"Danny Smith is a leader of action with true compassion for the persecuted. In 1997 when he heard my family's freedom would have been in jeopardy if my wife and I, along with our two month old baby son continued to be trapped in Hong Kong before the imminent handover to China, he acted swiftly by flying to Hong Kong. I still remember what he told me and my wife: that he was determined to see our freedom, otherwise `I will stay with you as long as you need.' To those who wants to make a difference for the lives of persecuted, this is a must read book. Encouraging, empowering and edifying." -- Bob Fu, Founder and President, ChinaAid
"This is an amazing book, telling the most riveting stories of many people from all walks of life, who are passionate about human justice and who work tirelessly to achieve it. It is beautifully and sensitively told by Danny Smith, whose determination `to set the prisoner free' has never wavered. No one can read this book and remain unmoved. With humility and admiration, I salute you Danny." -- Fiona Castle OBE, Author and Broadcaster
DANNY SMITH is the co-founder of Jubilee Campaign, a registered charity that combines effective lobbying with transformational charitable action for Children at Risk worldwide. Jubilee Campaign was awarded consultative status at the UN and helped to set up the All Party Parliamentary Group on Street Children in 1992 and served as its secretariat for over a decade.
GOR005019394
9780745956008
0745956009
Shouting into the Silence: One man's fight for the world's forgotten by Danny Smith
Danny Smith
Used - Very Good
Paperback
Lion Hudson Plc
2013-07-01
240
N/A
Book picture is for illustrative purposes only, actual binding, cover or edition may vary.
This is a used book - there is no escaping the fact it has been read by someone else and it will show signs of wear and previous use. Overall we expect it to be in very good condition, but if you are not entirely satisfied please get in touch with us
Trustpilot