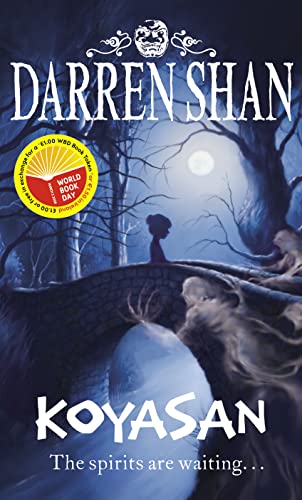 Take a step into the unknown in a spine tingling story for World Book Day from the internationally bestselling Darren Shan.

Take a step into the unknown in a spine tingling story for World Book Day from the internationally bestselling Darren Shan.

"The boys and girls in the graveyard were shouting, but Koyasan no longer heard them. The world had become a wide, grey void. She could hear deep rasping sounds, the breath of creatures which had been human once but weren't any more..."

Koyasan is too scared to cross the bridge and play in the graveyard like the other children. But when her sister's soul is stolen, she must find the courage to enter a realm of evil, shape-shifting spirits.

And the spirits are waiting...

"The master of children's horror at his blood-curdling best." Publishing News

Praise for The Saga of Darren Shan

Born in London in 1972, Darren O'Shaughnessy [writing as Darren Shan] moved to Limerick with his parents and younger brother. Returned to London to study Sociology and English then worked for a TV cable company. His first adult novel Ayuamarca has been published by Orion and his writing has been likened to Clive Barker and Iain Banks. He is now a full-time writer of TV scripts and novels. Cirque du Freak is his first title for children.

GOR000531322
Koyasan by Darren Shan
Darren Shan
Used - Very Good
Paperback
HarperCollins Publishers
2006-03-02
112
000722138X
9780007221387
N/A
Book picture is for illustrative purposes only, actual binding, cover or edition may vary.
This is a used book - there is no escaping the fact it has been read by someone else and it will show signs of wear and previous use. Overall we expect it to be in very good condition, but if you are not entirely satisfied please get in touch with us.