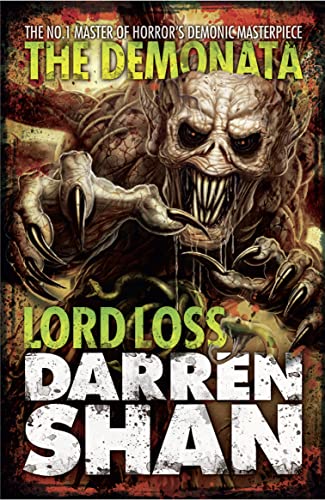 The first book in the Demonata, the demonic symphony in ten parts by multi-million-copy bestselling horror writer Darren Shan...

The first book in the Demonata, the demonic symphony in ten parts by multi-million-copy bestselling horror writer Darren Shan...

When Grubbs Grady first encounters Lord Loss and his evil minions, he learns three things:
* the world is vicious,
* magic is possible,
* demons are real.

He thinks that he will never again witness such a terrible night of death and darkness.

"The master of children's horror at his blood-curdling best." Publishing News

GOR001068756
Lord Loss (The Demonata, Book 1) by Darren Shan
Darren Shan
The Demonata
Used - Very Good
Paperback
HarperCollins Publishers
2006-01-03
272
0007193203
9780007193202
N/A
Book picture is for illustrative purposes only, actual binding, cover or edition may vary.
This is a used book - there is no escaping the fact it has been read by someone else and it will show signs of wear and previous use. Overall we expect it to be in very good condition, but if you are not entirely satisfied please get in touch with us.