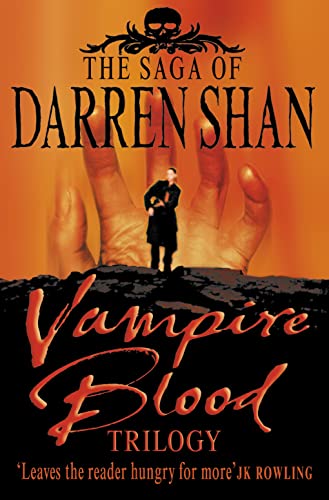 CIRQUE DU FREAK
Darren goes to a banned freak show with his best mate Steve. It's the wonderfully gothic Cirque Du Freak where weird, frightening half human/half animals appear who interact terrifyingly with the audience. After he sees the amazing performing spider, Madam Octa, Darren is determined to steal her. But his daring theft goes horribly wrong. The spider bites Steve and Darren has to sell his soul to an evil vampire to get the antidote.

THE VAMPIRE'S ASSISTANT
Darren joins the vampire, Mr Crepsley, as his assistant and they return to the Cirque Du Freak. There, Darren makes friends with the snake-boy, Evra Von (who knows what Darren is) and a local boy, Sam, and RV, an eco-warrior and animal lover (who do not). Darren begins to enjoy his life among the Cirque performers as the youngest half-vampire in existence, but he defiantly refuses to drink human blood - the whole idea sickens him - and he tries desperately to cling on to the part of him which is human.

TUNNELS OF BLOOD
When Mr Crepsley is called upon by the Vampire Generals, Darren and the snake-boy, Evra Von, leave the Cirque Du Freak and travel with him to the city. Whilst there, Darren meets Debbie and his life as a Vampire's Assistant fades into the background - until corpes are found. Corpses drained of blood... Suspicious of Mr Crepsley's secretive bahaviour, Darren and Evra shadow him across the city and confront a creature of the night who may be the end of them all...

Born in London in 1972, Darren O'Shaughnessy [ writing as Darren Shan] moved to Limerick with his parents and younger brother. Darren returned to London to study Sociology and English then worked for a TV cable company. His first adult novel Ayumarca has been published by Orion and his writing has been likened to Clive Barker and Iain Banks. He is now a full-time writer of TV scripts and novels.

GOR001219942
Vampire Blood Trilogy: Books 1 - 3 (The Saga of Darren Shan) by Darren Shan
Darren Shan
The Saga of Darren Shan
Used - Very Good
Hardback
HarperCollins Publishers
2003-09-01
512
0007143745
9780007143740
N/A
Book picture is for illustrative purposes only, actual binding, cover or edition may vary.
This is a used book - there is no escaping the fact it has been read by someone else and it will show signs of wear and previous use. Overall we expect it to be in very good condition, but if you are not entirely satisfied please get in touch with us.