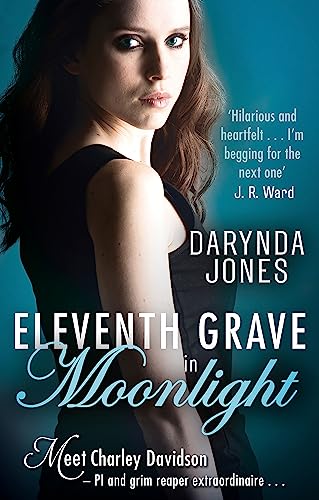 'The grim reaper gets a shiny cook makeover in Jones's blazing hot debut... will appeal to fans of MaryJanice Davidson and Janet Evanovich.' Publisher's Weekly

'What's better than a bad-ass girl grim reaper who keeps us safe from hell hounds and demons? (The answer is obviously nothing.)' RT Book Reviews

As a part time Private Investigator and full-time Grim Reaper, Charley has to balance the good, the bad, the undead, and those who want her dead.

Now Charley is learning to make peace with the fact that she is a goddess with all kinds of power and that her own daughter has been born to save the world from total destruction. The forces of hell are determined to see Charley banished forever to the darkest corners of another dimension but with the son of Satan himself as her husband, maybe Charley can find a way to have her happily ever after after all.

'I am furiously envious of Darynda Jones and rue the day she came up with this concept, damn her eyes. First Grave On The Right kidnapped me from the first paragraph, and didn't let go until the exceedingly yummy conclusion.' MaryJanice Davidson, New York Times bestselling author of the Undead series

'First Grave on the Right is smart, sharp and wickedly entertaining. Grab this one.' Jayne Ann Krentz, New York Times besselling author of Fires Up

The best debut novel I've read in years! Hilarious and heart-felt, sexy and surprising, this paranormal has it all: a a heroines you want to be best friends with, a mysterious dark hero and a twist at the end that'll knock your socks off. I'm already begging for the next one! * J. R. Ward *
The UF genre just gor a major infusion of humour and sass in the form of PI Charley Davidson (aka the Grim Reaper). Jones makes a truly memorable debut. * RT Book Review Magazine *
The author's sarcastic sense of humour . . . grows on the reader as the story progresses. Jones skilfully establishes the novel's setting and keeps up the pace with plenty of action. And let's be honest - the sex is pretty hot, too. Fans of Sherrilyn Kenyon and other authors of paranormal romance will love this series debut. * Library Journal *
First Grave on the Right is a phenomenal debut! This series opener has it all - rollicking humour, sizzling sexual tension, and a spine-tingling mystery. Darynda Jones blew me away with all of her characters, but especially with her heroine Charley, a beautiful yet endearingly imperfect private investigator/grim reaper whose observations had me laughing out loud throughout. I'm eagerly awaiting the next Charley Davidson tale! * Kresley Cole, New York Times bestselling author of Pleasure of a Dark Prince *
First Grave on the Right is witty, darkly thrilling, and oh-so-sexy! * Gena Showalter, New York Times bestselling author *
The 11th from Jones (The Curse of the Tenth Grave, 2016, etc.) is densely packed with supernatural problems, sex scenes not for the timid, and assorted complicated mysteries. * Publishers Weekly *
Seems crazy that we're already on installment eleven, but in all honesty this is one series that I'd be happy if it never came to an end. * For the Love of Words *
Next in the New York best-selling paranormal series, still steaming along after The Curse of the Tenth Grave. * Library Journal *
This series is a must read for anyone who enjoys their paranormal romance with a side of snark and snappy one-liners. * Knockin Boots *

Darynda Jones's writing has won her several awards, including a 2009 Golden Heart in the Paranormal Category for First Grave On The Right and the 2012 RITA awards for Best New Book. She lives in New Mexico, with her husband of more than 25 years and two sons.

GOR008367690
Eleventh Grave in Moonlight by Darynda Jones
Darynda Jones
Charley Davidson
Used - Very Good
Paperback
Little, Brown Book Group
2017-01-24
320
0349411441
9780349411446
N/A
Book picture is for illustrative purposes only, actual binding, cover or edition may vary.
This is a used book - there is no escaping the fact it has been read by someone else and it will show signs of wear and previous use. Overall we expect it to be in very good condition, but if you are not entirely satisfied please get in touch with us.