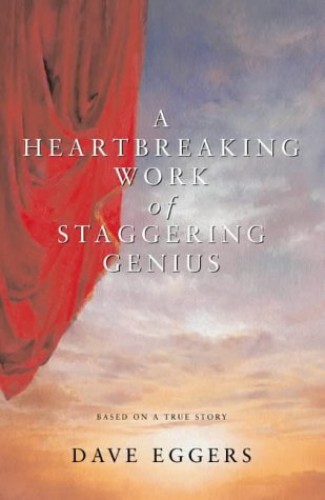 A Heartbreaking Work of Staggering Genius
by Dave Eggers

In Stock
£4.49
This is the default conversion keynote text and should be changed.
Very Good Good
6 in stock

A Heartbreaking Work of Staggering Genius by Dave Eggers

Dave Eggers's parents died from cancer within a month of each other when he was twenty-one and his brother, Christopher, was seven. They left the Chicago suburb where they had grown up and moved to San Francisco. A Heartbreaking Work of Staggering Genius tells the story of their life together.

'The story is at once funny, tender, annoying and, yes, heartbreaking - an epic about family and how families fracture and fragment and somehow, through all the tumult and upset, manage to endure . . . A virtuosic piece of writing, a big, daring, manic-depressive stew of a book that noisily announces the debut of a talented - yes, staggeringly talented new writer' Michiko Kakutani, New York Times

'Eggers is an original new voice, the real thing. When you read his extraordinary memoir you don't laugh, then cry, then laugh again; you somehow experience these emotions all at once - and powerfully'

Dave Eggers is the founder of McSweeney's, a quarterly journal and website (www.mcsweeneys.net), and his books include You Shall Know Our Velocity, How We Are Hungry, Short Short Stories, What is the What, and the bestselling A Heartbreaking Work of Staggering Genius. His work has appeared in the New Yorker and Ocean Navigator. He is the recipient of the Addison Metcalf Award from the American Academy of Arts and Letters, and was a 2001 finalist for the Pulitzer Prize. He lives in Northern California.

GOR000825766
A Heartbreaking Work of Staggering Genius by Dave Eggers
Dave Eggers
Used - Very Good
Hardback
Pan Macmillan
2000-07-21
400
0330484540
9780330484541
Short-listed for Guardian First Book Award 2000 (UK) Short-listed for Pulitzer Prize for General Non-Fiction 2001 (UK)
Book picture is for illustrative purposes only, actual binding, cover or edition may vary.
This is a used book - there is no escaping the fact it has been read by someone else and it will show signs of wear and previous use. Overall we expect it to be in very good condition, but if you are not entirely satisfied please get in touch with us.