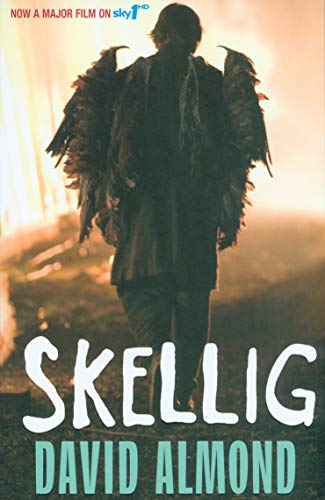 Michael's world after his family moves house seems lonely and frightening, when his new baby sister is fighting for her life in hospital. Then he discovers something - a creature in the crumbling garage, and nothing is ever the same. Winner of the Carnegie Medal, Whitbread Award and Hans Christian Andersen Award 2010.

When a move to a new house coincides with his baby sister's illness, Michael's world seems suddenly lonely and uncertain.

Then, one Sunday afternoon, he stumbles into the old, ramshackle garage of his new home, and finds something magical. A strange creature - part owl, part angel, a being who needs Michael's help if he is to survive. With his new friend Mina, Michael nourishes Skellig back to health, while his baby sister languishes in the hospital.

But Skellig is far more than he at first appears, and as he helps Michael breathe life into his tiny sister, Michael's world changes forever . . .

Lyrical, innovative and unforgettably moving. * Sunday Express (Cressida Cowell) *
Lyrical, innovative and moving...unforgettably moving -- Cressida Cowell * Sunday Express *
The book I wish I'd written is Skellig by David Almond. Almond's book has a great sense of the mysterious; we are left with a sense of wonder. I wish that I had written it! -- Joseph Delaney * Books For Keeps *
This modern classic has been reissued in a beautiful 15th anniversary edition -- Lorna Bradbury * The Sunday Telegraph *
An exquisitely crafted book with a mystical core * The Daily Telegraph *
The sort of children's book that makes adults find excuses to read more of them * Times Educational Supplement *
Hard to put down -- Liz Lightfoot * The Daily Telegraph *
Refusing to read this book on the grounds that you are not a child makes as much sense as refusing to read crime fiction because you are not a criminal. A deep and lovely book. -- Nick Hornby * The Times *
An exquisite book * The Sunday Telegraph *
Brings Magical Realism to working-class Northeast England * i (The Independent) *
A story full of heart and magic and big confusing emotions, elegantly told by a master craftsman. A perfect piece of art -- Lucy Christopher * Big Issue (london) *
Touched with a visionary intensity, this strange, hugely readable and life-affirming tale exercises every muscle of the imagination * The Guardian *
Humorous, heart-stopping and haunting...an emotional roller-coaster of a read with a cliff-hanger of a conclusion. Inspired and inspiring. * Newcastle Journal *
A visionary story...a lyrical, magical kind of book which can be read on many different levels * The Daily Mail *
Voted Carnegie Medal's Number one Top Book of the past 70 years * The Times *
I can't eat a chinese takeaway without thinking about this strange and beautiful book about an angel who seems to have lost his way. -- Gill Harvey * The Big Issue *
A bookshelf essential. * The Guardian *
Deservedly popular * The Observer *
Powerful and moving * Guardian.co.uk *
A beautiful story which will enchant young and old alike * Western Morning News *

* The Daily Telegraph *
One of those books that you can't put down -- Junior Reviewer Conor Neison, aged 12 * Evening Echo (Cork) *
. . . gripping, beautiful and brilliantly written . . . Everyone is raving about this unforgettable book. * The Sunday Times *
Touched with a visionary intensity, this strange, hugely readable and life-affirming tale exercises every muscle of the imagination. * The Guardian *
A stunning debut . . . An extraordinary book. * The Sunday Telegraph *
the most lyrical children's author now writing * The Guardian *
'Truly original, mysterious and affecting . . . Almond treads with delicate certainty, and the result is something genuine and true' * Philip Pullman, The Guardian *
'Tremendously innovative, highly original and very moving.' * Melvin Burgess *
'it's a wonderfully original and beautifully written story and, oddest of all for a children's book, it manages to address the unlikely theme of spirituality with beguiling delicacy.' * The Irish Times *
'His characters are proper, complex portraits of children that don't succumb to the gender cliches prevalent in children's fiction.' * The Irish Times *
'A deep and lovely book' * The Times *
'A bookshelf essential.' * The Guardian *
A beautifully told modern fairytale. * Observer *