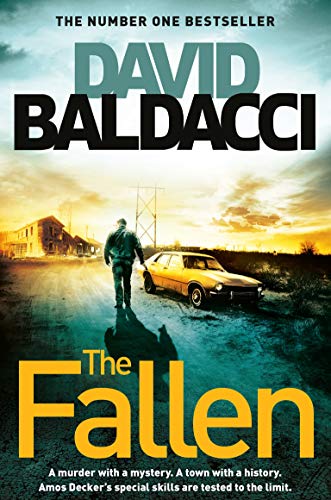 The Fallen
by David Baldacci

Used Price
£2.99
New RRP £8.99
Free Shipping in the UK
From one of the world's favourite thriller writers, this is the fourth title in the Amos Decker crime series, following the bestselling Memory Man, The Last Mile and The Fix.
Very Good Good Well Read

The Fallen by David Baldacci

The Number One Bestseller.

Amos Decker, David Baldacci's unique special agent with the gift of a remarkable memory, returns in The Fallen.

Small towns which have seen better times are not unusual. But the mysterious events in Baronville, Pennsylvania, are raising the highly-tuned antennae of agent Amos Decker and his FBI partner, Alex Jamison. What was supposed to be a relaxing vacation turns into a murder investigation when two bodies are found in a nearby deserted house.

With the body count rising, Decker and Jamison dig deep to uncover a sinister truth in Baronville, which could be the canary in the coal mine for the rest of the country.

But even the duo's skills and Amos Decker's infallible memory may not be enough to save the town, or them, from becoming the next victims.

Already among the world's bestselling writers, Baldacci hardly needs to prove himself but he's created one of the most intriguing, complex anti-heroes . . . Impossible to put down, especially because of Decker, who weaves a powerful spell * Daily Mail *
A compelling puzzler . . . Baldacci is a truly gifted storyteller, and this novel is a perfect "fix" for the thriller aficionado * Associated Press on The Fix *
It's big, bold and almost impossible to put down . . . Decker is one of the most unusual detectives any novelist has dreamed up . . . I called this novel a masterclass on the bestseller because of its fast-moving narrative, the originality of its hero and its irresistible plot . . . Highly entertaining * Washington Post *

David Baldacci is one of the world's bestselling and favourite thriller writers. With over 130 million copies in print, his books are published in over 80 territories and 45 languages, and have been adapted for both feature-film and television. David is also the co-founder, along with his wife, of the Wish You Well Foundation (R), a non-profit organization dedicated to supporting literacy efforts across the US.

GOR009472085
The Fallen by David Baldacci
David Baldacci
Amos Decker series
Used - Very Good
Paperback
Pan Macmillan
2018-10-30
656
1509874291
9781509874293
N/A
Book picture is for illustrative purposes only, actual binding, cover or edition may vary.
This is a used book - there is no escaping the fact it has been read by someone else and it will show signs of wear and previous use. Overall we expect it to be in very good condition, but if you are not entirely satisfied please get in touch with us.