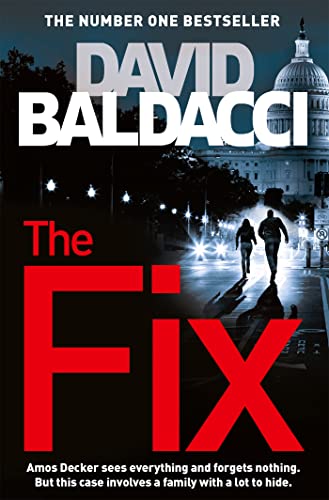 The Fix
by David Baldacci

Used Price
£2.99
New RRP £8.99
Free Shipping in the UK
Amos Decker, the special agent with an astonishing set of skills takes on a murder case in the heart of Washington DC and finds himself exposing a much larger conspiracy that reaches the highest levels of the US government.
Very Good

The Fix by David Baldacci

Amos Decker, David Baldacci's unique special agent, who suffered a head injury that resulted in giving him the gift of a remarkable memory takes on another case in The Fix.

Walter Dabney is a family man. A loving husband and the father of four grown daughters, he's built a life many would be proud of.

But then the unthinkable happens.

Standing outside the FBI Headquarters in Washington, DC, Dabney shoots school teacher Anne Berkshire in cold blood before turning the gun on himself.

One of the many witnesses is Amos Decker; a man who forgets nothing and sees what most miss. Baffled by what appears to be a seemingly senseless and random killing, Decker is thrust into the investigation to determine what drove this family man to pull the trigger.

As part of an FBI special task force, Decker and the team delve into the lives of Dabney and Berkshire to find a connection that doesn't seem to exist. What they do find are secrets that stretch back a lifetime and reveal a current plot of impending destruction that will send the world reeling, placing Decker and his team squarely in the crosshairs.

The page-turner of the season -- The Times on The Last Mile
Already among the world's bestselling writers, Baldacci hardly needs to prove himself but he's created one of the most intriguing, complex anti-heroes . . . Impossible to put down, especially because of Decker, who weaves a powerful spell -- Daily Mail on The Last Mile
Baldacci inhabits the skin of his creations - tripping us up with unexpected empathy and subtle identification -- Sunday Express on The Last Mile
A clever thriller in the Jeffrey Deaver mould * The Sun on The Last Mile *

GOR008692045
The Fix by David Baldacci
David Baldacci
Amos Decker series
Used - Very Good
Paperback
Pan Macmillan
2017-10-31
640
1447277449
9781447277446
N/A
Book picture is for illustrative purposes only, actual binding, cover or edition may vary.
This is a used book - there is no escaping the fact it has been read by someone else and it will show signs of wear and previous use. Overall we expect it to be in very good condition, but if you are not entirely satisfied please get in touch with us.