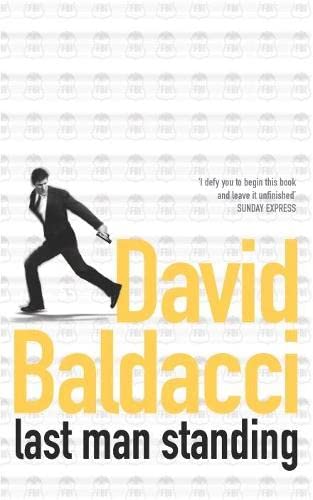 In Stock
£4.49
Pan is delighted to welcome the backlist of one of the world's greatest storytellers
Very Good Good
Only 4 left

Seven seconds. That's all it took for Web London to lose everything: his friends, his team, his reputation. Point man of the FBI's super-elite Hostage rescue Team, Web roared into a blind alley towards a drug leader's lair, only to meet a high-tech, custom-designed ambush that killed everyone around him.

Coping with the blame-filled words of anguished widows and the suspicions of colleagues, Web tries to put his life back together. To do so, he must discover why he was the one man who lived through the ambush - and find the only other person who came out of the alley alive . . . a ten-year-old boy who has since disappeared. Acting on his instincts, Web believes he knows where the killer will strike next. Only this time, he may not survive the attack.

In this extraordinary work, Baldacci uses his unsurpassed storytelling skills to explore the essence of survival itself, as a conspiracy of violence surrounds an FBI agent whose fate was to be the . . . LAST MAN STANDING.

'Accomplished and amazing - one of the hottest reads around' (DAILY MAIL) 'A plot strong enough to make the bath go cold around you' (INDEPENDENT ON SUNDAY) 'An adrenaline-pumping plot that could, once again, make you late for work' (HEAT)

David Baldacci is the seven-time New York Times best-selling author of ABSOLUTE POWER, TOTAL CONTROL, THE WINNER, THE SIMPLE TRUTH, SAVING FAITH, WISH YOU WELL and LAST MAN STANDING. His most recent novel, SPLIT SECOND, will be published by macmillan in December 2003. He lives in Virginia with his wife and two children.

GOR000648339
Last Man Standing by David Baldacci
David Baldacci
Used - Very Good
Paperback
Pan Macmillan
2003-11-21
576
0330419706
9780330419703
Short-listed for Paddy Power Political Book Awards Political Biography of the Year 2013 (UK)
Book picture is for illustrative purposes only, actual binding, cover or edition may vary.
This is a used book - there is no escaping the fact it has been read by someone else and it will show signs of wear and previous use. Overall we expect it to be in very good condition, but if you are not entirely satisfied please get in touch with us.