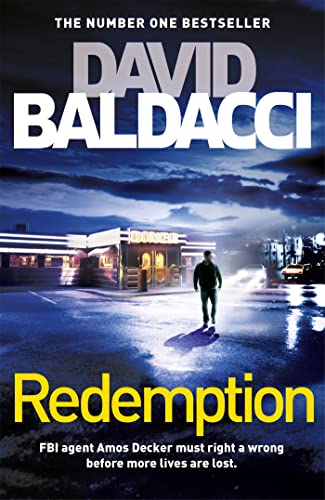 FBI consultant Amos Decker returns to the scene of a family tragedy, and is confronted by more than just painful memories.

A felon on a mission.

When Decker returns to Burlington, Ohio, he is tracked down by his first homicide arrest, Meryl Hawkins, a man who still maintains his innocence.

With Hawkins recently released from his life sentence, Decker finds himself questioning what had once seemed watertight evidence. Is the real killer still out there?

A murderer at large.

As the body count rises in a new crime spree, Decker and his former partner Mary Lancaster dig deeper and reopen the old case - and old wounds.

Back in his home town and plagued by the ghosts of his past, Amos Decker is compelled to discover the confronting truth in the fifth Memory Man thriller of David Baldacci's number one bestselling series.

David Baldacci is one of the world's bestselling and favourite thriller writers. With over 130 million copies in print, his books, including Redemption, Long Road to Mercy and One Good Deed are published in over eighty territories and forty-five languages, and have been adapted for both feature-film and television. David is also the co-founder, along with his wife, of the Wish You Well Foundation (R), a non-profit organization dedicated to supporting literacy efforts across the US.

GOR010147233
Redemption by David Baldacci
David Baldacci
Amos Decker series
Used - Very Good
Paperback
Pan Macmillan
2019-10-29
656
1509874410
9781509874415
N/A
Book picture is for illustrative purposes only, actual binding, cover or edition may vary.
This is a used book - there is no escaping the fact it has been read by someone else and it will show signs of wear and previous use. Overall we expect it to be in very good condition, but if you are not entirely satisfied please get in touch with us.