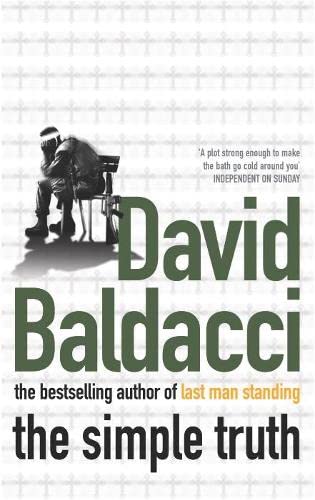 The Simple Truth
by David Baldacci

In Stock
£5.49
A heart-stopping story of an evil conspiracy at the heart of the American legal system . . .
Very Good Good
Only 4 left

The Simple Truth by David Baldacci

As a young conscripted soldier, Rufus Harms was jailed for the brutal killing of a schoolgirl. Yet, after twenty-five hard years of incarceration, a stray letter from the US army reveals new facts about the night of the murder - and the evil secret shared by some of Washington's most powerful men. Fearful for his life, Harms seizes his one chance to escape. But within hours the only people who knew about the appeal have been hunted down and eliminated.

As the unknown assassins close in on Harms, ex-cop turned criminal attorney John Fiske is drawn into the web. His younger brother is already a victim, the woman he loves is under threat. For the truth and the chance of a fututre, he will never give up the fight. But for both men time is already running out. Their enemy is buried deep witin the system and completely ruthless when protecting the truth . . .

David Baldacci is the seven-time New York Times best-selling author of ABSOLUTE POWER, TOTAL CONTROL, THE WINNER, THE SIMPLE TRUTH, SAVING FAITH, WISH YOU WELL and LAST MAN STANDING. His latest novel, SPLIT SECOND, will be published by Macmillan in Decamber 2003. He lives in Virginia with his wife and two children.

GOR000359967
The Simple Truth by David Baldacci
David Baldacci
Used - Very Good
Paperback
Pan Macmillan
2003-11-21
528
0330419676
9780330419673
N/A
Book picture is for illustrative purposes only, actual binding, cover or edition may vary.
This is a used book - there is no escaping the fact it has been read by someone else and it will show signs of wear and previous use. Overall we expect it to be in very good condition, but if you are not entirely satisfied please get in touch with us.