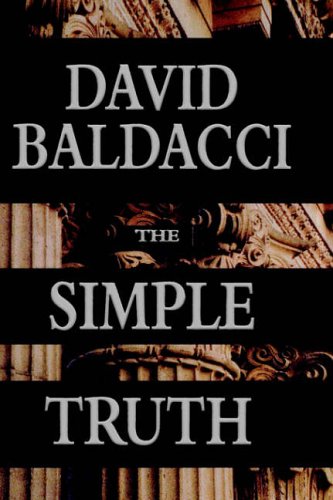 The Simple Truth
by David Baldacci

In Stock
£5.99
The phenomenally bestselling author of "The Winner" and "Absolute Power" returns with another riveting tale. Twenty-five years after he's convicted of a murder he's convinced that he committed, Rufus Harms' memory is jogged by a shocking realization: he's not guilty. From prison, he secretly files an appeal with the Supreme Court, unaware that the real killers are on to him.
Good Well Read
Only 3 left

The Simple Truth by David Baldacci

Behind the scenes, the U.S. Supreme Court is a battleground of egos, intellects and power. Here brilliant young attorney Mike Fiske toils as an elite foot soldier. His colleague Sara Evans is clerking for a female Court justice who is powerfully connected to Congress. Far from the imposing facade of the High Court is the world of street crime, prison time, and bare-knuckles criminal courts defense. In a Virginia military prison Rufus Harms is just one more lifer claiming innocence. Convicted of killing a girl on an army base twenty-five years ago, Harms smuggles a desperate letter out of his prison cell. It's a bombshell -- an appeal to the Supreme Court -- that claims he was forced to commit murder. Suddenly everyone who has anything to do with Harms or the appeal mysteriously dies, including Mike Fiske. When his brother, John, an ex-cop, investigates and asks for Sara's help, they both face a conspiracy that is shaking the very foundations of power in Washington. And the one man who can help them, the one man who knows what really happened twenty-five years ago -- and why -- has escaped from prison and is running for his life.

"A strong-boned thriller...captivating characters...vivid detailing of the Supreme Court behind closed doors--where the truth, apparently, is anything but simple."--Publishers Weekly
"Another wild Baldacci ride...fascinating...engrossing...more than just a fast-paced thriller...Baldacci is still one of the best thriller writers around, and that's the simple truth."--Richmond Times-Dispatch
"Top-notch...Baldacci writes thrillers that will keep you on the edge of your seat and guessing right up until the end...John Grisham has some serious competition."--Southern Pines Pilot (NC)
"Fascinating."--Cleveland Plain Dealer

David Baldacci is a global #1 bestselling author, and one of the world's favorite storytellers. His books are published in over 45 languages and in more than 80 countries, with over 130 million worldwide sales. His works have been adapted for both feature film and television. David Baldacci is also the cofounder, along with his wife, of the Wish You Well Foundation, a nonprofit organization dedicated to supporting literacy efforts across America. Still a resident of his native Virginia, he invites you to visit him at DavidBaldacci.com and his foundation at WishYouWellFoundation.org.

GOR002652174
The Simple Truth by David Baldacci
David Baldacci
Used - Good
Paperback
Little, Brown & Company
1998-11-01
470
0446523321
9780446523325
N/A
Book picture is for illustrative purposes only, actual binding, cover or edition may vary.
This is a used book - there is no escaping the fact it has been read by someone else and it will show signs of wear and previous use. Overall we expect it to be in very good condition, but if you are not entirely satisfied please get in touch with us.