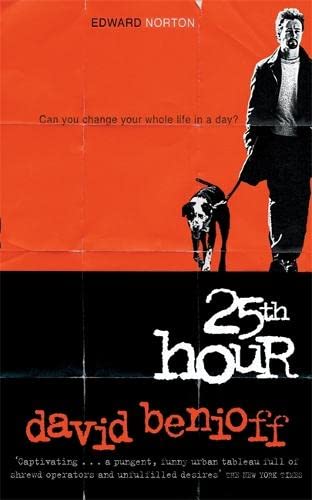 The 25th Hour
by David Benioff

In Stock
£4.49
A character-driven crime novel; a spellbinding portrait of three buddies confronting the consequences of their carefree youth on the streets of New York.
Well Read
Only 1 left

The 25th Hour by David Benioff

Monty Brogan starts a seven-year prison sentence for dealing drugs tomorrow. Tonight is his last night of freedom. His father wants him to run. His drug-lord boss, Uncle Blue, wants to know if he squealed. His girlfriend isn't sure what she wants, and his two best friends know one thing for sure; after he goes in, he will never be the same.

David Benioff has published articles and stories in GQ, Seventeen and Zoetrope, as well as in the anthologies The Ex-Files and Best New American Voices 2000. Born and raised in New York City, he now lives in Los Angeles. This is his first novel.

GOR003629779
The 25th Hour by David Benioff
David Benioff
Used - Well Read
Paperback
Hodder & Stoughton General Division
2003-03-31
288
0340826541
9780340826546
N/A
Book picture is for illustrative purposes only, actual binding, cover or edition may vary.
This is a used book - there is no escaping the fact it has been read by someone else and it will show signs of wear and previous use. Overall we expect it to be in very good condition, but if you are not entirely satisfied please get in touch with us.