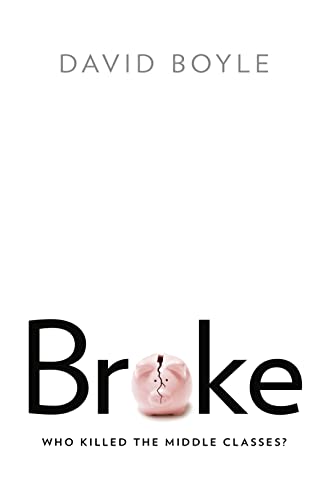 If you thought being middle-class meant your own home, something set aside for the kids and a comfortable retirement - think again.

Broke: Who Killed the Middle Classes? by David Boyle

If you thought being middle-class meant your own home, something set aside for the kids and a comfortable retirement - think again.

For the first time ever, today's middle classes will struggle to enjoy the same privileges of security and comfort that their grandparents did. How did this situation come about? What can be done about it?

In this beautifully shaped inquiry, David Boyle questions why the middle classes are diminishing and how their status, independence and values are being eroded. From Thatcher's boost of the mortgage market to Blair and Brown's posturing over public services, `Broke' examines the key moments in recent history that created `the squeezed middle'.

Can the middle classes be revived? Should they be? Although they were not innocent in their downfall, Boyle argues that a newly galvanised middle class could be the key to future economic stability. The middle class may be broke, but it is not beyond repair.

`The tone of the book may be gloomy but there is plenty of entertainment value ... Could even be your holiday read if you are unable to afford a house in a suburb that your parents thought scruffy but is now ultra-smart, thanks to an influx of foreign bankers ... engrossing and contentious' Anne Ashworth, The Times

`There is endless interesting stuff in this book ... he explains what he calls the "middle-class crisis" - and he's spot on' William Leith, Evening Standard

`He tells these stories, on the whole persuasively and with some startling asides' New Statesman

`A book that is engagingly sensitive to the sentiments of what is sometimes called "middle England"' Dominic Lawson, Sunday Times

`At the heart of Broke is a competent account of how the economic upheavals of recent decades have impacted upon the population, from the point of view of those in the middle income bracket ... By assigning the "great British virtues" solely to his own class, Boyle is merely setting himself up for an unmissable televised showdown with Owen Jones.' Alastair Mabbott, The Herald

David Boyle has been writing about the past and the future, and new ideas in economics, for more than a quarter of a century. He is a fellow of the New Economics Foundation and has just completed an independent review for the Cabinet Office. He is the author of The Tyranny of Numbers, The Human Element and Authenticity: Brands, Fakes, Spin and the Lust for Real Life. He lives in London.

GOR004690715
Broke: Who Killed the Middle Classes? by David Boyle
David Boyle
Used - Very Good
Paperback
HarperCollins Publishers
2013-04-25
352
0007491034
9780007491032
N/A
Book picture is for illustrative purposes only, actual binding, cover or edition may vary.
This is a used book - there is no escaping the fact it has been read by someone else and it will show signs of wear and previous use. Overall we expect it to be in very good condition, but if you are not entirely satisfied please get in touch with us.