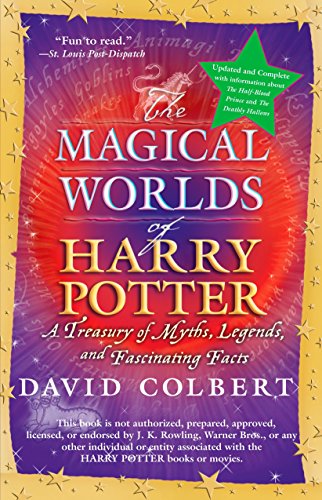 The Magical Worlds of Harry Potter
by David Colbert

In Stock
£14.99
This indispensable source guide to J.K. Rowling's Harry Potter novels has been revised and updated to include the latest works in the series.
Very Good
Only 1 left

The Magical Worlds of Harry Potter: A Treasury of Myths, Legends, and Fascinating Facts by David Colbert

What was the model for The Order of the Phoenix?
Where do those names come from?
What is the real-life legend behind Voldemort's Dark Mark?
Could Snape's potions actually work?

J.K. Rowling's young heroic wizard, Harry Potter, lives in a world populated by dragons, centaurs, trolls, giants--and a three-headed dog named Fluffy--among other creatures from ancient myths and legends. Discover the astonishing origins of supernatural beasts, clues to hidden meanings in names, and amazing facts about real-life wizards and magic spells. From Alchemists to Unicorns, Basilisks to Veela, this fascinating compendium brings another dimension to Harry's adventures--from The Sorcerer's Stone to The Deathly Hallows.

This book was not authorized, prepared, approved, licensed or endorsed by J.K. Rowling, Warner Bros., or any other individual or entity associated with the HARRY POTTER books or movie.

Praise for The Magical Worlds of Harry Potter

"Digs deep into different cultures and mythologies to piece together the origins of Rowling's characters. Learn about griffins, goblins, Latin, and why Harry is a universal hero."--The Baltimore Sun

"Have you ever wondered where J.K. Rowling gets her ideas for fantastic beasts and magical critters? You can learn about them in The Magical Worlds of Harry Potter."--Detroit Free Press

"A feast for future game-show contestants...You could use it as reference to set up a round of Jeopardy!"--The Orlando Sentinel

"A guide to the history, literature and mythology Rowling sprinkles throughout her four Harry Potter books. Grown-ups might like [it] too, because it painlessly exposes youngsters to Shakespeare, Chaucer, Ovid, Flaubert and more."--St. Louis Post-Dispatch

"Potter fanatics...can revel in details and hidden mysteries of the series."--The Columbus Dispatch

Formerly a head writer for Who Wants to be a Millionaire, David Colbert, author of The Magical Worlds of Harry Potter and The Magical Worlds of The Lord of the Rings, is best known as an author of the acclaimed Eyewitness history series. A graduate of Brown University, he studied anthropology and mythology and has spent much of his life in libraries.

GOR004684161
The Magical Worlds of Harry Potter: A Treasury of Myths, Legends, and Fascinating Facts by David Colbert
David Colbert
Used - Very Good
Paperback
Penguin Putnam Inc
2008-05-06
335
0425223183
9780425223185
N/A
Book picture is for illustrative purposes only, actual binding, cover or edition may vary.
This is a used book - there is no escaping the fact it has been read by someone else and it will show signs of wear and previous use. Overall we expect it to be in very good condition, but if you are not entirely satisfied please get in touch with us.