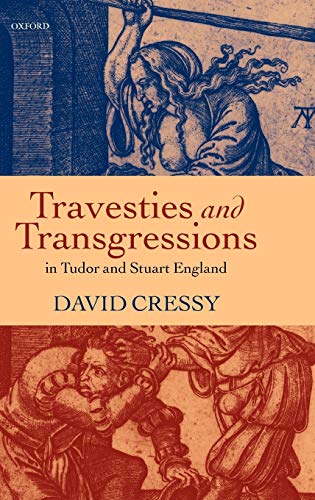 In Stock
£6.99
Travesties and Transgressions examines how the orderly and Protestant society of post-Reformation England coped with the cultural challenges posed by beliefs and events outside the norm. It shows how unorthodox happenings such as bestiality and abortion, nakedness and cross-dressing set the authorities on edge.
Very Good
Only 2 left

Travesties and Transgressions in Tudor and Stuart England Summary

In Travesties and Transgressions, David Cressy examines how the orderly, Protestant, and hierarchical society of post-Reformation England coped with the cultural challenges posed by beliefs and events outside the social norm. He uses a series of linked stories and close readings of local texts and narratives to investigate unorthodox happenings such as bestiality and monstrous births, seduction and abortion, excommunication and irregular burial, nakedness and cross-dressing. Each story, and the reaction it generated, exposes the strains and stresses of its local time and circumstances. The reigns of Elizabeth, James, and Charles I were witness to endless religious disputes, tussles for power within the aristocracy, and arguments galore about the behaviour and beliefs of common people. Questions raised by 'unnatural' episodes were debated throughout society at local and national levels, and engaged the attention of the magistrates, the bishops, the crown, and the court. The resolution of such questions was not taken lightly in a world in which God and the devil still fought for people's souls.

Travesties and Transgressions in Tudor and Stuart England Reviews

A stimulating and thought-provoking contribution to cultural history. * English Historical Review *
Throughout this work Cressy shows the fruits of diligent archive work. One gets a clear and very useful impression of the multiple levels of the distribution of power and government, and particularly of the rhetorics within which they operate ... Every piece here is stimulating. * Reformation *
Of interest to historians, literary scholars, and historical anthropologists ... a fine interdisciplinary study. * Sixteenth Century Journal *
In this highly readable and instructive book, the well-known social historian David Cressy tells fifteen stories of strange or troubling incidents ... he seeks to avoid the conventional formulation of a problem and a hypothesis and a "clear sense of closure", relying instead on laying out his evidence as fully as possible, listening carefully to the "voices of the past", and remaining alert to multiple connections and layers of significance. * Ralph Houlbrooke, Times Literary Supplement *

List of illustrations ; Introduction ; 1. Agnes Bowker's Cat: Childbirth, Seduction, Bestiality and Lies ; 2. Monstrous Births and Credible Reports: Portents, Texts and Testimonies ; 3. Mercy Gould and the Vicar of Cuckfield: Domestic and Clerical Pleading ; 4. Rose Arnold's Confession: Seduction, Deception and Distress in the Heart of England ; 5. The Essex Abortionist: Depravity, Sex and Violence ; 6. Another Midwife's Tale: Alcohol, Patriarchy and Childbirth in Early Modern London ; 7. Cross-Dressing in the Birth Room: Gender Trouble and Cultural Boundaries ; 8. Who Buried Mrs Horseman? Excommunication, Accommodation, and Silence ; 9. Mocking the Clergy: Wars of Words in Parish and Pulpit ; 10. The Atheists Sermon: Belief, Unbelief and Traditionalism in the Elizabethan North ; 11. Baptised Beasts and Other Travesties: Affronts to Rites of Passage ; 12. The Battle of the Altars: Turning the Tables and Breaking the Rails ; 13. The Portraiture of Prynne's Pictures: Performances on the Public Stage ; 14. The Downfall of Cheapside Cross: Vandalism, Ridicule and Iconoclasm ; 15. The Adamites Exposed: Naked Radicals in the English Revolution ; Conclusion ; Index